So Many Subgenres, So Little Time! 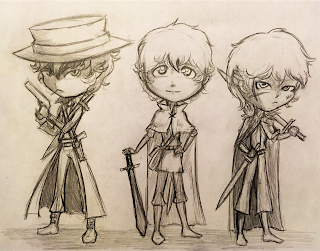 So you're interested in fantasy. Well, there's a whole lot of fantasy out there, and looking into the waters can be...well...let's just say they can be intimidating.

What do I mean? I mean SUBGENRES!

Man. Even the word looks intimidating, doesn't it?

No worries. Subgenres are simply a way to define a storytelling trend in a book. Genres in general are used for marketing purposes. It's much easier for a person who is looking for a mystery novel to have an entire section of a book store dedicated to what might interest them than to need to read the back of EVERY book and search through EVERY shelf just to find something that they might find interesting.

Yes, genre can be quite handy for the book-consumer, and for those who need to sell said books to said consumers. Genre simplifies things, so that a person in search of a cozy romance doesn't accidentally buy an H.P. Lovecraft anthology.

It looks so simple. Then you get into subgenres.

Oh, dear. What are those?

It's quite simple. Subgenres are the genres within the genres.

On a single horror shelf, you might find a slasher horror, a psychological horror, a supernatural horror, a Lovecraftian horror, the list goes on and on.

A fantasy shelf can be just as convoluted.

So, if you're new to the subgenre game, here are some of the more common subgenres in fantasy, and the basics of what they mean.


This is what most people think of when they think 'Fantasy'. They think of a completely different world, with magic being flung around, complex stories, Lord-of-the-Rings-esque aesthetics. Magic in these worlds tends toward being well-defined, cultures are descriptive and deep, and the history of the world feels like it would go back hundreds - if not thousands - of years. They are often epic in scale, and have many themes woven throughout the story itself.


Urban Fantasy is fantasy that is set in our world, but has a hidden world of magic behind it. Oftentimes urban fantasy involves figures like vampires, werewolves, demons, and faeries, and generally supernatural themes and events.


Realistic Fantasy is also called 'Gritty Fantasy'. Realistic fantasy is a subgenre that tends toward having less of a dependence on magic, and also tends toward darker themes, events, and writing. The characters are more inclined to have shades of grey in their moral choices rather than being pure black and white, and are more likely to be anti-heroes than true heroes or villains.


This is a subgenre that often gets mixed up with grimdark fantasy, which also tends toward being very pessimistic and dark. There are subtle differences between grimdark and realistic, but I find the main difference to be that grimdark is more inclined to use magic than realistic fantasy is. I personally find the terms to be a bit interchangeable, but it really depends on how specific and picky you want to get over the terminology.

In terms of what the different subgenres are, and how specific one gets, is all down to personal preference. Regardless of subgenre, a grimdark and an epic fantasy are still fantasy. At the end of the day, it's all still the same genre.

Unless it's Science Fiction. Sci-fi and fantasy are quite different, and shouldn't be considered interchangeable. In spite of what some bookstores may try to do.

Anyway, these are my observations on the more common subgenres. These are really the basic breakdowns of what they are, but I hope they might be found helpful.

If you want a more detailed and broken-down list of fantasy subgenres and what, exactly, are the differences between them, you can check out bestfantasybooks.com . They have an extremely comprehensive list of more subgenres than I even knew could be considered subgenres of fantasy.
Posted by Nicole Kapteyn at 20:33