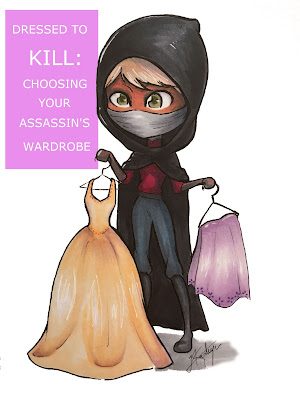 So. You're an assassin.

...just play along for a bit, alright?

You're an assassin. You've been given a mission. You are now starting to get ready to go kill some fools for some sweet, sweet cash.

So. What are you going to wear?

(If you can give me an honest answer as to the right clothes you prepare to wear while killing people...please stay away from me. Maybe turn yourself into the police. Seek help. Don't kill people. Please. Please.)

This might not seem like that big of an issue, but the wardrobe of an assassin is actually quite a big deal. How the character dresses can tell a lot about this character's culture, worldview, methods, and, overall, their personality.

Do they hide themselves completely when they kill? Do they kill in plain sight? What is their purpose behind their killing? How does their wardrobe play into the method itself?

The way an assassin dresses can make them stand out and can tell a lot about them, so let's get talking about dressing your killer.


Like all things of this nature, I like to work in lists, breaking down the elements of the blog into a handy dandy format.

That's not going to be any different here, so let's get started.


To Start Things Off: Plot Out Your Assassination

"Hey! I thought this was about being dressed to kill fools! Why are we talking about plotting assassinations?"

Here's the big thing: The method of death is going to be the first factor in figuring out what your assassin is going to wear.

If you're going to be sneaking into anywhere, you need to know how to blend in.

Going sneaking at night? Dark tones are best with a quiet fabric and soft shoes or foot coverings.

Plan on killing someone in plain sight? Dress in the common fashion and move with the crowds.

How about murder at a fancy party? Time to dress to the nines.

Situation is a huge part of picking an assassin's wardrobe. Blending in is the best way to get away with murder and get close to a target.

One of the most famous assassins in Japan was the Hitokiri Battousai, who fought during the Bakumatsu as a government assassin. Apparently, he was so good at blending in that he once approached and killed an official in broad daylight and walked away without being caught.

(There were actually four Hitokiri during the Bakumatsu, from what I've seen, and what I've heard is that one of them did this, but don't take my word as gospel here. I am not an expert on historical Japanese assassins.)

The power of blending in is the greatest power an assassin can have, so take advantage of it.

Sometimes, blending in isn't the point of the assassination. Sometimes, an assassin (or the organization they work for), want to make a point.

Case in point, Szeth in The Way of Kings.

"Szeth-son-son-Vallano, Truthless of Shinovar, wore white on the day he was to kill a king. The white clothing was a Parshendi tradition, foreign to him. But he did as his masters required and did not ask for an explanation."
-The Way of Kings, by Brandon Sanderson.

Although Szeth isn't wearing white to make a statement, it becomes a defining characteristic throughout the story. When he eventually gets hired to kill more people (not really a spoiler), he is once again told to wear white in order to perpetuate and increase his reputation. Everyone feared the Assassin in White, and the uniform became his trademark.

Other killers who wear a certain uniform so that their kills are known are killers who act in accordance with a religious sect, such as the assassin priestesses of Karak in the Shadowdance series wearing wraps. As in, all they wear is lengths of fabric wrapped and wound around their body. The wraps act as a way of identifying who/what they are, hiding their personal identities (the wraps go over their faces and hair, hiding everything but their eyes), and the process of putting the wraps on act as a form of meditation and spiritual preparation before making a kill/going into battle.

Sometimes, having a uniform isn't about showing off - it's about marking oneself as a certain kind of assassin.

In the Night Angel trilogy, by Brent Weeks, the main 'assassins' in their world are called 'Wetboys'. There are normal assassins as well, but the way that it is put is that there is a distinct difference: where assassins have targets, Wetboys have 'deaders'. As soon as they take a contract, their target is dead without knowing it yet.

As a way to mark themselves out, they wear what they call the wetboy grays, which consists of clothing that is dyed a mottled gray. They are the only ones to wear this particular uniform, and when the wetboy grays were put on, it meant that death was on the way.

So it comes down to this when it comes to uniforms: the purpose of a uniform is to mark out a character as belonging to a group, so keep that in mind. Sometimes, people want a statement to be made.


Once you have your assassination location decided, you can move forward in the outfitting process. If your assassin doesn't wear a typical uniform for dramatic purposes, it's time to look at the next step:

As important as it is for your assassin to be fashionable (the best way to blend in is to work with the generally accepted fashion of the times), the most important element of an assassin's clothing is the functionality of it.

The functionality of the clothes will need to be adjusted depending on the method of killing (for example, a poisoner will need different things as a part of their outfit than a swordsman), but here are some basic tips to keep in mind:

- Fighting in a corseted dress isn't actually that difficult, provided you know how to move in it. If the corset is done up properly (not the way that the French and English found fashionable, but in the way that corsets were designed to be worn), if the person wearing the dress has trained themselves to move with the skirts, and if the dress has been designed to have loose sleeves for a full range of movement, fighting in a dress is a simple enough matter. (You can likely find videos of people fighting in dresses on YouTube. The videos exist, I'm just too lazy to hunt down the links. Go find them yourself.)

- On the topic of dresses, keep in mind that skirts are also excellent places for hiding weapons, and an assassin's clothing overall should have many places for weapon hiding. (Layered clothing, heavy or billowy fabrics, cloaks, coats, etc; are all good for this.) If need be, an assassin should always be able to fall back to hand-to-hand if things come down to a fight or if things are in private, but a good assassin should be sneaky enough to not get into a fight in the first place. Therefore, pockets and hidden compartments are of utmost importance, whether a character uses weapons or poisons.

- Clothing can also be used in creative ways that complement an assassin's fighting style. In the Shadowdance series by David Dalglish, the main character, Haern, wears several cloaks layered on top of one another, and moves in such a way so that the fabric moves and hides his movement. They tear off easy, and create a distracting, mesmerizing effect to take down his enemies, which allows him to take his enemies off guard.

- As sexist as it may seem, women can also easily use clothing to distract - in particular - male targets. Charm, seduction, and sexuality are all valid ways for a female assassin to get a target vulnerable, and the clothing they choose to wear is a major part of the method. Although a woman is just as capable of killing a target through conventional means, never underestimate the power of seduction and feminine wiles.

Let's get back to the first point, and that point is that, for the most part, blending in is the best weapon an assassin can have. The clothing should always be on the more functional side of things, but the most important part of function is to allow a character to slip in and out unseen.

Gain an understanding of the fashions of the times in the world you are writing. Figure out who is least likely to be noticed, who is most likely to gain access, and what role would gain your assassin the best angle of assassination. Learn how disguises work. (Heist and spy films tend to be good for seeing how this kind of thing can work, particularly films like the Oceans and Mission Impossible franchises.)


Anyway, those are some tips on how to get your assassin dressed for the occasion, and get ready to do some dark, despicable deeds.

Now go off, look through those wardrobes, and make that assassin fabulous.


Thank for reading, and I hope you enjoyed it! If you did, feel free to leave a comment and give it a share. Helps a bunch! Have a good night, and I'll see you next week!
Posted by Nicole Kapteyn at 18:53