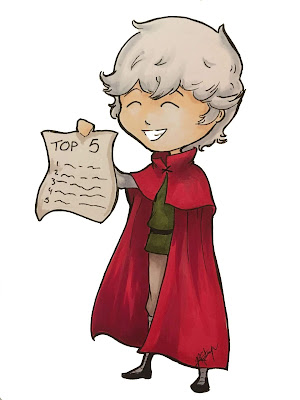 Welcome to October, dear readers, and welcome back to another Top Five Wednesday!

If you don't know, I am part of the Goodreads group Top Five Wednesday, which is an open group where a topic for a top five list is given, and everyone gives their rankings for that list. (Check out the group right here, and you can see my previous top five here.)

Anyway, today's topic is a really exciting one to me, and that is the Top Five Magic Systems!

As a person who is a huge fan of the fantasy genre (and, for that matter, mostly reads fantasy), I have a certain love of magic systems that has developed over the years. I've even actually written a full blog post talking about some of the basics of magic systems some time back (Check it out right over here, if you feel so inclined).

And so, without further ado, here are my top five magic systems to kick off the month!


I easily could have filled this entire list with picks from Brandon Sanderson's work on the Cosmere, considering how well crafted his magic systems and worldbuilding is. However, to keep things more diverse, I decided to just go with my favourite one from him.

It's a system that has many facets to it, but the way we see it used the most in the book is that people can use biochromatic breath to bring inanimate objects under their control by infusing it with breath. When something is infused with breath (be it inanimate or alive), it becomes more vibrant and colourful. If something has the breath drawn out of it, it loses all colour and becomes grey.

(Honestly, it would probably be the most cinematically interesting magic system in his books, next to Stormlight. It's REALLY visual.)

Colour is literally the magic system, and it's really cool.

This is a series that has a dual magic system, so I'm bringing up both.

In the series, there are two kinds of users: the Augurs and the Gifted.

The Gifted can only use Essence, which is a magic that is drawn from a source within them. The Essence allows them to use energy as magic in the traditional sense - creating defensive shields and offensive weapons out of nothing but the power within them, that kind of thing.

The Augurs can use both Essence and Kan, with Kan being a kind of magic that draws from the life of the world around them. Kan also gives other abilities, such as the ability to see the future, read minds, tell when someone is lying, shapeshift, slip in an out of time, etc;

It's a really cool pair of systems that compliment each other well, and are really fun and interesting to read about.

3. Grit (From The Thousand Deaths of Ardor Benn; by Tyler Whitesides)


Now this is a system that felt REALLY different to me for a couple reasons.

First reason: it's a system that is completely external, so absolutely anyone can use grit to create magical effects. It's even used in the world's technology, creating things like guns, airships, transports, etc;

Second reason: there is a massive variety of types of grit, from kinds that create explosions, to ones that create anti-gravity fields, and they can be mixed to create new and exciting effects.

Third reason: grit is made by feeding certain substances to dragons, letting them go through the digestive tract, and then harvesting the items out of the dragon's waste before refining the items down into powder, AKA, Grit.

Yup. This is magic that is literally made out of dragon dung.

It's way cooler than it sounds. Trust me.

4. The Skill/The Wit (From The Farseer Trilogy; by Robin Hobb)


The Skill and the Wit, like Essence and Kan, are two highly linked magic systems in the same world that complement each other.

Skill is a system that is based in telepathy between humans. It's commonly accepted and respected among the people of the world.

Wit is a system that is based in telepathic bonds between humans and animals. If somebody is discovered to have the Wit, they are sentenced to a horrible fiery death.

Seriously, though. This is a magic system that belongs to one of the most famous and beloved adult fantasy trilogies of all time, and the magic system is one that still stands out to me years after reading it, particularly the Wit side of it. Seeing how the people with the Wit interact with the world differently and have to act in ways to hide their abilities and bonds to their animals is one of my favourite parts of it.

If you can't tell, I really like it when books have more than one magic system, and when those systems complement one another. I find that it adds a neat layer of complexity to the worldbuilding.

If you don't know, in the Stormlord trilogy, the world is a massive desert, where the only way for people to regularly get water is through the actions of the Stormlords, people who can pull fresh water from the distant ocean and turn it into clouds, then sending the clouds to give rain at scheduled times to specific areas.

As I remember it, this was one of the first hard magic systems that I ever really read, and it was really fascinating how creative Glenda Larke got with how it would work.

Water painting is the secondary magic system, which is basically a system where certain people can paint a picture, and whatever was shown in the picture will become true. Basically, they create the future with their art.

(As a side note, if you haven't ever read Glenda Larke's Stormlord trilogy, check it out. It's really neat.)

Anyway, those are my Top Five Magic Systems! Do you agree with my picks? What are some of your favourite magic systems? Let me know in the comments, I would love to hear them!

Thanks so much for reading, and I'll talk to you later!
Posted by Nicole Kapteyn at 22:44