The 13 Types of Villains You Will Find in the Wild 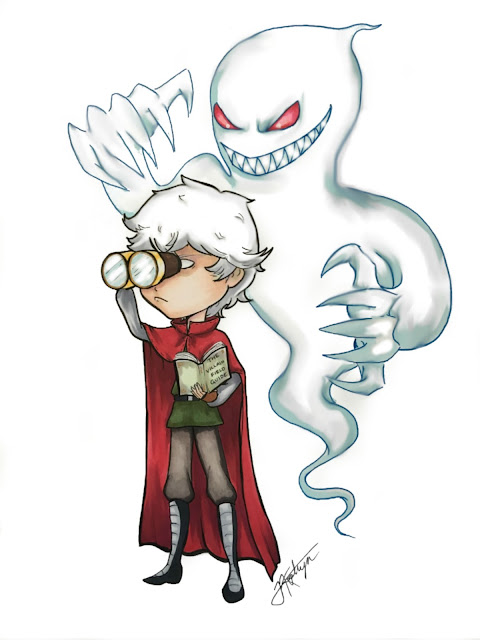 Therefore, one must arm themselves with the most valuable weapon of all: Knowledge!

Oooooh...don't do that. Just arm yourself enough to make it in the crazy worlds of fiction, please. We don't need another entry on the list. Not yet.

Anyway, it's Friday the 13th, and so I would like to arm you with some villainous knowledge.

Here are thirteen varieties of villains that you may encounter in your fictional travels.

Fantasy readers, beware! This is a villain who tends to lurk in the fantasy genre, which might have been started by the most famous Evil Overlord/Dark Lord ever, Sauron, from The Lord of the Rings trilogy, by the father of modern fantasy himself J. R. R. Tolkien.

These villains tend toward being...not as proactive as some of the other villain varieties in this list. Evil Overlords tend to prefer to delegate hoards and hoards of minions to do their work for them, while they sit menacingly in their throne rooms and do the most dastardly thing of all...BROODING.

Brooding aside, these villains are chill.

There are, of course, a few instances in which a Dark Overlord can lose their chill. For example, if a soldier comes with bad news or a commander fails them, you bet that the Overlord is going to move off that throne and steal that incompetent fool's soul. (Or decapitate them. Decapitation is always an option.) Otherwise, they are mostly active in flashbacks and during final showdowns with those darn heroes.

Smug, masters of the evil laugh, and melodramatic to the extreme, the Evil Overlord always cuts a striking figure.

Particularly if said figure is striking at them.

This is a villain who even predates the Evil Overlord. Who is one of the most used villains of all time. The Evil Queen, who holds a grudge like no other. She is the woman scorned. She is the woman who is jealous of the looks of a seven year old. She is the most vain and wrathful female villain type out there.

Usually known as being exceptionally beautiful, the Evil Queen is a woman who found a way into power, and will kill to keep said power in her clutches.

This is a woman who you will see the most in fairy tales, and fairy tale retellings. She has been featured time and time again, often found lurking in children's tales to remind them that she was made to haunt their nightmares.

She is willing to go to any length to get what she wants, and she is not afraid to show it.

This is a woman who is frequently put in a similar position to the Evil Queen, a woman who has won control with beauty and magic. (In some retellings of Snow White, for example, the Evil Queen is a Seductive Sorceress).

These women tend to enjoy working in the shadows, subtly pulling the strings. People are drawn to their beauty, and she gains followers through her deception and allure.

The Seductive Sorceress tends to being psychologically and magically strong, relying on her wits and sexuality.

Watch out! You will likely run into a corrupt or evil government.

These are the Governments that have a beautiful and pristine outside, but a horrible and disturbed inner system. It's corrupt and dangerous. You'll find these most commonly in Dystopian books, such as the classic 1984, The Hunger Games trilogy, Divergent, and The Maze Runner.

These governments tend to have a ruthless, cunning, and very dangerous figurehead. When it's Dystopian YA, this is the figure who the spunky group of misfit teens needs to take down.

These governments are oppressive and often subtly violent, full of death on the inside. There is usually some kind of elitist class system to keep the people in line, and stories involving an oppressive government often follow a story of revolution.

This is a character who will be swift to make you an offer you can't refuse. And if you do refuse, be sure to run for your life.

The Crime Lord or Gentleman Gangster is suave, sophisticated, and almost always in perfect control. They are a kingpin of the criminal underworld, and bring about a sense of organization and order to the chaos of crime. They are possessive of their families, and if a character ends up indebted to a Gentleman Gangster, you can bet that the debt will be paid in full.

These characters are like alpha wolves. They protect their pack and are extremely territorial. Once you are part of the pack, they will protect you with their lives.

Try to leave the pack, or try to do anything out of line, and it will be your corpse for dinner.

Much like the previous entry, the Thug Gangster is also a ruler in the criminal underworld.

The difference? Think of it this way: a Gentleman Gangster is cold. They hide their emotions. They are delicate, classy, and calculating until the moment of a strike.

A Thug Gangster is hot. They fly into a rage faster. They have a habit of acting before laying their plans. They aren't tacticians; they are fighters. They are dangerous in a way of unpredictability and sudden anger, but they lack the subtle care of their more sophisticated brethren.

Thug Gangsters and Gentleman Gangsters, naturally, don't tend to get along so well.

I would say 'wicked stepmother', but let's face it. We've all seen this kind of villain done in many incarnations.

Lady Tremaine from Cinderella, the definitive wicked step-mother. Darth Vader from Star Wars. Claudius, from Hamlet. (Or Scar from The Lion King, basically the same character.)

These are basically the worst. Parents. EVER.

Or uncles. Depends on the relation.

These are the abusive parental figures. The ones who should be supporting the hero, and yet are causing ALL THE PROBLEMS. They are controlling. Manipulative. Deadbeats. Overall, 'Wicked' is too kind of a term to describe these villains.

These are the villains who are one hundred percent under the belief that they are fully justified in their actions. Often times, they use the excuse of 'God wanted me to stab that person five hundred times', or 'it must be done because the ghosts wanted me to do it'.

They make excuses. That is their thing.

Self-righteous killers are in a constant state of disillusionment, believing that they are honestly doing the right thing. They believe that they are the hero. They are so wrapped in their fantasies that they don't realize that it isn't God telling them to do it, it's just their own twisted minds.

These might be the scariest villains, because they are so convicted in their actions that nothing can stop them. Even if some part of them says that what they are doing is wrong, it will be completely drowned out by their own conviction. They are the murderous zealots.

Just as a villain can't reason with a hero who believes that stopping the villain will save the world, a hero will not be able to talk a self-righteous killer out of their evil acts.

This is the Joker brand of psychopath.

Much like the Self-Righteous Killer, a Maniacal Psychopath cannot be reasoned with. They are agents of chaos. They live in their own worlds where everything is completely snapped. They kill for the sake of killing, and they enjoy every second of being evil.

The Maniacal Psychopath isn't always the best planner. When they make plans, they are sure to be spectacular, but they enjoy impromptu, unexpected murder sprees and mischief just as much as a planned heist. They live for the thrill. They live to watch things burn.

They are unpredictable, because the moment their plan starts to fail, they improvise.

Bounds of fun and terror wait with this kind of crazy.

Well, fun if you're crazy too. If not...good luck.

They will enjoy your liver with some fava beans and a nice chiante. Or amarone. Are we talking about book Hannibal, or movie Hannibal?

The similarities between the Cold Psycho and the Maniacal Psycho? Well, both are psychopaths. Both are insane and terrifying. Both lack certain qualities that are present in most reasonable human beings.

The difference is one that can be related to writing: one is a plotter, the other is a pantser.

The Maniacal Psychopath is the pantser. They act on impulse. What feels right in the moment. What seems fun and interesting. They want to get to the point rather than sit around waiting and making sure every move is perfect. Improvise.

The Cold Psychopath plots. They are obsessive over details. They make sure that everything is in perfect order. They are willing to bend to circumstance when necessary, but they act more like spiders than wolves. A wolf will attack his prey when its in view. They plot for a few moments, then strike.

The spider waits. They spin their perfect web, and wait until their prey inevitably falls, struggles, and suffers as it waits for the end to come.

This might seem a little odd, but stick with me.

An anti-hero is a protagonist that doesn't fit the regular mold of a hero. They do things that are in the grey or dark areas of morality.

In any other story, the anti-hero could probably be the villain at a moment's notice.

Let's look at Deadpool. Sure, when we see things from his side, he's not so bad. He's actually quite hilarious and often tragic.

But if we actually look at what he's doing...

(That's not a spoiler. There's literally a comic series about Deadpool killing the entire Marvel Universe.)

Yeah. From another point of view, he could easily be the villain.

So, yeah. What is an anti-hero but a different point of view on a villain? (Even if that villain has often been softened to lean more toward the heroic side)

If you ever run into one of these guys, please. I beg of you.

If you can't tell, these are the villains that creep me out the most.

They are, in some ways, like the self-righteous killers in that they justify their actions as being for some greater good.

They are different in that rather than just mercifully killing their victims, they do other horrible, horrible, HORRIBLE things to them. Experiments. Vivisections. Disections. Torture. All the horrible things in the name of 'science'.

These characters have an unending morbid sense of curiosity. Sometimes they make monsters, but let's face it.

We know who the actual monsters are.

Yeah, I know I just lumped 'monsters' all together in one singular section, but they at least deserve a shout-out.

Monsters, of course, are the things that go bump in the night. They can be a variety of things: the aforementioned most popular three. Mummies. Dragons. Faeries. Demons. Succubus and Incubus. Aliens.

The list of monsters in fiction is as endless as imagination. As long as we can imagine new monsters, the list will continue on.

Some of the best villains known are monsters. Frankenstein's Monster. Dracula. The Mummy. The Creature from Black Lagoon. The Xenomorph.

I can't tell you what to do when you encounter these creatures, fellow fictional forayer. They are all too different.


But hey, these are just books. Monsters and villains can't get out of the pages. When villains bite, you can just turn the page or close the book. The villains can't get you, but they'll always be there to thrill and entertain. You can just observe from the outside, calmly walking through fictional worlds without the fear of being hurt.

Right?
Posted by Nicole Kapteyn at 17:01