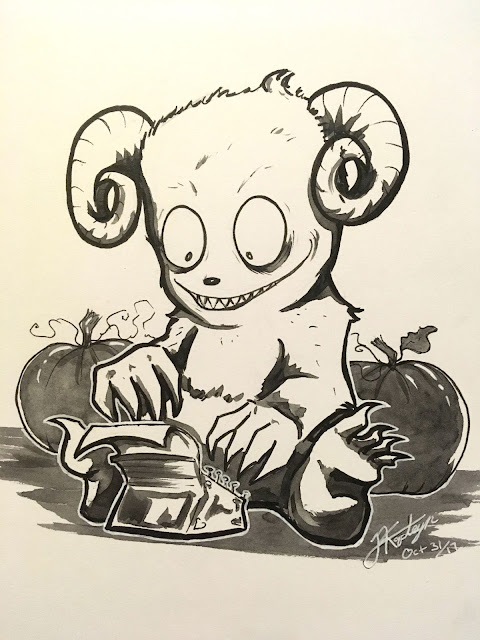 Today, I'm not focussing on candy and ghouls and all things in between. I'm thinking of something else. A different kind of monster.

Tomorrow is November First, and with it comes NaNoWriMo!

For those who don't know, that is National Novel Writing Month, the event in which people set out to write a novel from start to finish in the month of November. By the technical definition of the term 'novel', that is 50,000 words. There are contests, goals, the whole shabang.

This is also my first year where things have lined up so I can actually participate! Yay!

What, though, is the actual goal of NaNoWriMo?

I recently read an article that was bluntly against the idea of NaNoWriMo, saying that all it did was create crappy novels and bad book proposals, and that people shouldn't bother with it at all. Basically, it was saying that the whole idea of the event was just fostering an idea of quantity over quality in words, since it focusses so heavily on word count. That NaNoWriMo, in spite of starting with good intentions, had devolved into making bad writing acceptable.

In some ways, this can be seen as true. Unless people do NaNoWriMo properly and actually treat this as a first draft and do a solid revision and edit through the next months before claiming it to be publication ready.

That's 20 full pages of sketches every day for a month.

This challenge, obviously, isn't for everyone. However, the purpose of it is to foster a habit of sketching, and teach how to draw quickly. Even if the art is bad, even if the sketches are messy and strange and have plenty of issues, the artist has no time to dally on a single drawing, and has to keep going, forcing them to learn and adapt.

NaNoWriMo works in a similar way.

To complete the challenge of 50,000 words in 30 days, one must write and average of 1,666 words every day. Some people will write considerably more on some days, while others will write less, but the point is that people are writing, and are trying to reach a goal.

They are making a work habit, and learning how to get past the first chapter and actually complete a first draft without being hung up on edits, because they have that word count that they want to achieve.

The good words and good artwork is hidden behind thousands of words and sketches.

The not so good words and sketches need to get out first.

My personal goal with NaNoWriMo is to become faster at completing a book, and to actually write a standalone story (everything I've been working on for the past several years has been a connected series, so I want to have practice at tying the threads of a story.)

The book I plan on writing is a story that has been lurking in my head for a very long time, and it's about time that I give these characters and this world the time that it deserves, and actually finish a story for them.

Another personal goal I have is to not just write 50k words in this book, but to actually complete the first draft. Considering that my estimate for this book's length is about 100k, that will mean writing 3,333 words on average per day to get it completed.

Whether or not I will successful in this is...questionable, but here's hoping for the best.

Anyway, that's my spiel. Probably going to be blogging a bit on the writing process as I go. That kinda thing.

On that note, happy NaNoWriMo! Enjoy the process, get lots of writing done, and have fun!

Time to get writing!
Posted by Nicole Kapteyn at 17:06