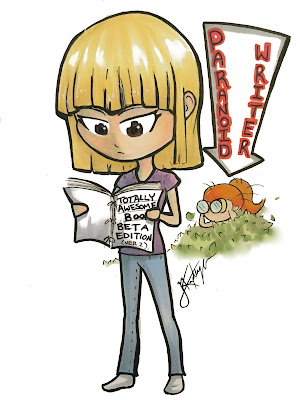 So you've finally worked your novel to a place where you feel at least vaguely comfortable with letting other people read it. You have a sense of pride in your work, and you are finally ready to show your hard work to the world.

You're ready for a Beta Read!

How do you hold a Beta Read so that you get the most out of it?

My personal experience with Beta Reads has been a bit of a learning curve, to be honest. For my first book, as an example, I held three separate Beta Reads, trying to pin down what the heck I was supposed to actually do (and consulting the powers of Google when I ran into problems).

Needless to say, I went into my first read knowing absolutely nothing aside from the fact that I needed people to read the book and give me an opinion on it.

This turned out to be far more complicated than expected.

That's what brings me to the subject of today's blog: the Top 5 Things I Wish I Knew Before Holding My First Beta Read.


1. DO NOT USE YOUR FIRST DRAFT


This might seem like a bit of an obvious point, but it really wasn't obvious to me when I started.

Yeah. For my first Beta Read, I gave people my first draft.

Not many people actually finished that one...

(People who were part of that first Beta Read, if you are reading this I am so sorry. I should have known better.)

DON'T use a first draft.

What I tend to do now is work on edits in waves. Once the First Draft is done, I go through and do a bit of a self-edit. By the time I'm done the book, I tend to already have any larger issues in mind to fix. I don't worry about smaller issues at this point unless it is glaring out at me.

The second editing wave is the Alpha Read. I have three people who read my manuscript in this phase, and since they all read fairly quick and they already know the input that I am looking for, they can give me the next stage of edits and I can implement them.

Now that I've gone through on my own and had a second opinion, I do some more edits to polish it up. Once I've done everything I feel I can do to doctor the manuscript, I send it off to my Beta readers.

So far, this kind of 'wave' system has worked really well for me, and has really helped me organize my editing. By the time I get advice back from my Alphas, I've had a short break to separate myself from the work, the same as the time between Alpha edits and Beta edits. It allows me to think of the book more objectively, and to find more issues as well if need be.

Having an author's note gives the opportunity for a few things:

- Establishing what my expectations are for the reader
- Giving necessary information about the book (for example, if it is the first in a series or, in the case of a sequel, if any impactful changes have been made to the world/story by the edits)
- Giving a deadline or timeline

As far as expectations go, I have particularly found that it needs to be specified that the purpose of the Beta Read is to read the book, not edit it. This is something I didn't specify the first time, and I found that what people assumed is that I wanted them to look for problems in the manuscript, which caused them to read slower, enjoy the book less, and, in most cases, not finish.

Obviously, this was an issue, so I really make sure that my Betas know what is expected from them.

Beta readers are not, generally, editors. Don't make the same mistake I did by treating them as such.

As far as giving necessary information, this is something that changes from book to book. For the first book, I just let people know that is was only the first in a series, and therefore wouldn't have every plot thread tied in a neat bow at the end. I like to know if the book I bought has sequels, so I want to make sure that my Betas know the same, as though they had picked the book off a shelf. For book two, the information I needed to give them was based in the fact that I had made some major worldbuilding edits, which could have caused confusion if the readers went in unaware of them.

The importance of a deadline is pretty evident, as I discovered when I gave out my first manuscripts (which, admittedly, were terribly huge due to being poorly thought out first drafts), and I ended up waiting for up to (if not more than) six months to get some of my work back.


3. HAVE A QUESTION SHEET


Speaking of reader expectations and the 'Beta Package', I have found question sheets to be one of the most valuable things to have for a Beta read.

One of the things I found when doing my first Beta Read was that people tended to give incredibly unhelpful opinions. I can't blame them for this, considering that I didn't outline for them what I was looking for, but the answers that I generally got when I asked for advice or opinions was 'I liked it' or 'It was good'.

Great. Those are answers that are entirely unhelpful when I'm looking for flaws.

So, I consulted the Google for Beta Reader Question Sheets. I managed to find a template here, and customized it to suit my personal needs from there.

As an example: I reworded most of the questions in order to make them make better sense for my story, and since I write fantasy I added questions pertaining to the clarity of the magic system and worldbuilding as well.

By adding the questions, I could get the specific answers that I was looking for, and was able to really find what issues I was having in a more streamlined and workable manner.


4. KNOW YOUR AUDIENCE, AND GO FOR IT


This goes beyond whether you are writing middle grade, YA, or adult, though it is EXTREMELY important to have Beta Readers who know your genre and who fit in your demographic. This also goes into the kind of character your protagonist is.

Something I noticed with my first Beta Read was that it was very female-heavy for the readers that I had. Now, it isn't really a problem to have a group that leans more heavily to one gender than another, though a balance is preferable. Honestly, this easily wouldn't have been an issue.

And, to be honest, until I had more men reading it, my main character really sounded more like a female character. He didn't have the right voice, because I didn't have enough people who understood that voice reading it.

If my main character were female, I would endeavour to make sure that a bulk of my Beta readers are female. (At the moment, the group is fairly even, but with my first read I had a VERY distinct imbalance, and it was a very small group)

This is mostly just making sure that there are people who are meant to relate to your main character the strongest reading your book, as much as possible.


5. YOU DON'T NEED TO IMPLEMENT EVERY SUGGESTION YOU RECEIVE


Always remember that you are the author. You have to be the one who, first and foremost, loves what is on the page. If a suggested edit feels wrong, you don't need to do it. If you feel like somebody is suggesting things that feel too much like they are trying to rewrite your book, you don't need to implement those changes.

However, if more than one person is bringing up a similar issue, then the odds are very high that it is an issue that needs to change. Be open to suggestions and edits. Even test out certain suggestions to see how you like them if you are questionable about how they would work.

If there is a suggested plot change that you feel strongly against, though, you don't need to change it. Know what you want the story to be, and stick to it. Your book is your book. NOBODY knows what that book is meant to be as well as you do, so as much as you need to be open, you also need to remember that you are the person who needs to love the book the most.

If you can't be confident in your work and enjoy it, if you aren't enjoying the characters or plot or world of what you're working on, then why keep working on it?

If someone is making strong suggestions, don't freak out. Don't try to defend yourself to them, and take their suggestions seriously but with a grain of salt.

Anyway, those are the top five things I wish I knew before holding my first beta read. There are more specific things as well, but that is the bulk of what I have learned.

One thing to keep in mind is that not everyone uses the same kind of beta system. Some people have a few readers. Some prefer a larger group. Some use a writing group.

Therefore, use what works for you. There is no set system, and there is no 'one right way' to get advice for your book.

(Unless you have a bunch of people locked in your basement who are being forced to read your work. Don't...don't do that.)

Ask writers that you follow how they do their beta reads. A lot of authors hold Ask Me Anything sessions on different sites, like on Goodreads or Reddit. Try to take part in beta reads yourself to see how other people do theirs. You never know what you can learn.

The biggest thing about holding a beta read, though?

In the words of Douglas Adams: Don't Panic.

Don't stress about it. If you're going into your first Beta read and this is your first time sending out your manuscript to get a second opinion, take a deep breath and don't worry. Your readers aren't out to get you.

Now go send your book into the wild. There are people waiting to read it.
Posted by Nicole Kapteyn at 18:33