Repeating Yourself: The Art of Bookending 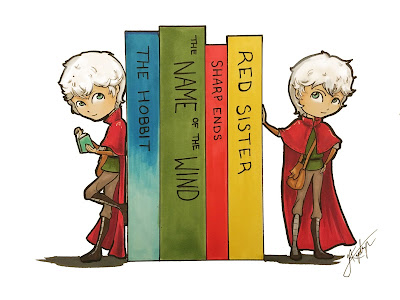 There's something incredibly satisfying about a story that has a cohesive feel, where it ends with a tight plot and a nice little bow on top. Ambiguity is nice, too, but there's just something wonderful about a perfectly tied together ending.

Of course, there are many, MANY ways to do this. Everyone has a different answer as to how to make a satisfying and cohesive conclusion for a story, and it's just not a subject that can really be tied down.

One way, though, is the Bookending Technique.

Odds are, you may have heard of it before. If not, you may be able to assume what it is.

(If you are lost, don't worry. I will explain it shortly.)

This is a technique I see more in film than in books (unless I'm just reading the wrong books for it. I don't know) and it's a technique/subject that was brought to my attention by a friend of mine, who I asked for ideas for topics to write on. (He's really into film, so I wanted to see what topics he thought would be interesting to talk about.)

This is what he requested, so let's get started.

What is Bookending Technique?


So, this isn't an official definition of what Bookending Technique is, but here is the basic gist of it/my basic definition. Here it is:

BOOKENDING TECHNIQUE: a technique in which a theme, line, or scene is reflected in the beginning and ending of the story to create a sense of unification and cohesiveness between the two parts; gives a sense of wholeness to a story.

Bookending technique could also be called 'Mirroring', but Mirroring is also a term used in psychology which explains the situation in which a person starts to mimic or 'mirror' actions, speech patterns, attitude etc; of another person, often in social situations, particularly in settings with family or close friends.

Since I don't want things to be confused and to keep the terminology straight for the purpose of this blog, I'm just going to call it Bookending.

How is it used?


Well, the basis of bookending is, as said, to create a sense of unification. By repeating the same detail in the beginning and the ending, the result is a way to show development. A line that is said in the beginning of the story can gain great meaning by being repeated at the end (for example, The Breakfast Club)

The way that this works is that context is added to previously mundane or small lines or scenes to give them power and impact. It adds weight and emphasis to symbolism or foreshadowing that was woven throughout the story or dropped in the beginning.

This kind of thing can also be shown not through the two 'bookends' being  exactly the same, but in the subtle differences, showing a form of development between the beginning and ending.

A more contemporary example is the Kingkiller Chronicles, by Patrick Rothfuss. If you have read them, you know exactly what I mean. If you haven't, the premise I'm talking about is that the prologue and epilogue of each book is exactly the same, with only a few small lines changed to show a development in the characters and mood.

Another example is from a short story that is in the Joe Abercrombie short story anthology Sharp Ends, in the story Tough Times All Over, where the first and last line of the story are exactly the same, but over the course of the story it takes on a whole knew meaning, since you are given context of what is actually happening.

Another way that bookending is done is with a theme from a section that is closer to the middle than to the beginning, and is then repeated or altered in the ending. (It can also be a form of repeated symbolism through a book to give an idea emphasis.)

An example of this is in the short story Made a Monster, by Joe Abercrombie. (This story is also from the anthology Sharp Ends.)

There is a character in this story that appears twice, and at the end of each scene (or near the end, at least), is the line: 'And he smiled that easy smile he used to have - the smile of a man who'd never entertained a dark purpose'

Each variation of the line is slightly different, but the feeling of them between the first and second scene is vastly different.

Other books that use this form of repeated lines and symbolism to bookend and unify a story are The Vagrant, by Peter Newman; Red Sister, by Mark Lawrence; and the film Requiem for a Dream.

(Hm. I seem to have a habit of choosing the darker kinds of stories as examples in this one...)

This technique, obviously, can also be used to unify an entire series. One of the best examples of this is The Wheel of Time series by Robert Jordan. Every single book begins with the same line: 'The Wheel of Time turns, and Ages come and pass, leaving memories that become legend. Legend fades to myth, and even myth is long forgotten when the Age that gave it birth comes again.'

Considering the cyclical nature of the series (how everything turns on the wheel of time, and everything will repeat itself, reincarnation, etc;), the use of the same line to open each book makes perfect thematic sense to unify the series.

So, that's how it has been used and a couple ways that it can be used, which leaves a couple questions:


Well, as said previously, it's used to create a sense of unity throughout the course of a story. It's used to solidify a theme.

Would the Silence of Three Parts in the Kingkiller Chronicles have the same impact if it wasn't used as a bookending and thematic device? Probably not. It would likely just be seen as a beautifully written prologue, but nothing else. However, by repeating it at the beginning and ending of each book, it pulls in the main idea of the story: A story told in three days, a series told in three books, and a silence that hangs in three parts over the main character.

Saying a theme only once doesn't make it a theme - it makes it a partial message. By giving the words and scenes meaning and weaving them through the story, a theme is created.

That's why the bookending technique is used: to give a part of the story more meaning than it previously had.

When should it be used?

So, how do you know if you should use it?

Well, experiment with it. See if it fits. See if it feels natural for you, or if it detracts from your writing process and style. Test it out in short stories. Run it past beta readers, if you are unsure if it is working.

However, here are some tips on how to go about using it, and things to keep in mind:

1. Less is more. While repeating symbolism and imagery can be a good thing, too much of it can quickly feel pretentious, and like the symbolism is being thrown into the reader's face rather than being introduced organically and subtly. Just as a phrase repeated a few times can bring meaning, a phrase repeated endlessly can lose any meaning that it previously had.

2. Don't try to force it. Symbolism should occur naturally. Where experimentation with it is a really good idea, to figure out how it works and get to know it as a tool, trying to force this kind of technique into a story will, again, come off as more pretentious than impactful.

Basically, use it judicially. That's all that can really be said about when to apply it.


Anyway, those are some of my thoughts on the bookending technique.

Hope you enjoyed, and I'll talk to you later.
Posted by Nicole Kapteyn at 13:57