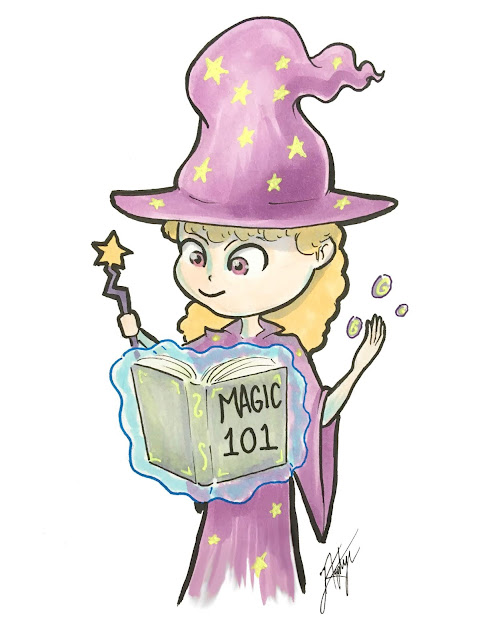 What makes a fantasy a fantasy?

Well, there are obviously many things. It takes place in a different world, tends to have lower technology, has new and mysterious cultures and creatures...

Arguably, though, there is one thing that comes to mind immediately when people hear the word fantasy: MAGIC.

Magic sure is fun, isn't it? Adding it into a story can bring mystery and mysticism to the mundane, uniqueness to things that could otherwise be ordinary.

Magic also happens to be everywhere.

Every fantasy world seems to have a form of magic. From Middle Earth to the Nevernever to Narnia to the ever expanding Cosmere, Magic Systems are in just about everything fantasy.

Well, it's all about spectrum, really.

That's right. Time to get to some magical definitions.

So let's start with this bombshell: all magic systems have one thing aside from the mystical in common: RULES.

These rules are meant to cover the main bases: Where the Magic comes from, who can use the Magic, how it is used, how it is learned, and what its limitations are.

As an example, in the Dresden Files by Jim Butcher, the main magic system can only be used by people who have the affinity for magic. It is based out of science and physics, is used through several methods that generally involve study and focus, and can be cancelled out by running water, as the person using magic needs firm ground beneath them. Magical parentage can influence whether or not someone has the affinity for magic, but anyone can have the affinity.

The revelation of these rules, and how much the reader/character know about them, bring about a little thing I like to call the Spectrum of Magic Systems.

Basically, the Spectrum works like this: it arranges magic systems from Soft Magic System to Hard Magic System.

A Soft Magic System is a magic system where the rules are undefined.

A Hard Magic System is a magic system where the rules are strongly defined.

It might not seem like that much of a difference, but trust me. The level to which the rules are revealed actually changes EVERYTHING about a magic system and how it works.


In A Hard Magic System:


We are made aware of the rules and limitations of the magic system in a usually clear and concise way, which can lead to some interesting benefits and drawbacks.

Having a hard set of rules forces the author and characters to be more creative within the confines of their system, allowing for more unique and less deus-ex-machina style solutions to problems. It can make the magic feel like a stronger piece of the world, allowing the author to integrate it stronger into the culture and worldbuilding itself, making it feel more natural.

Because the magic system has more concrete rules within its world, a hard magic system also tends toward influencing the culture in greater levels than with a soft system.

(A good example of this is in The Thousand Deaths of Ardor Benn, by Tyler Whitesides, where the magic system is linked to just about every aspect of culture, from the highest parts of politics, governmental structure, and religion, all the way to issues like economy and basic ways of life. The magic system works itself into every part of the peoples' daily lives.)

The drawback to this kind of system is that is can be difficult to make everything feel realistic and yet creative, and it forces more flexibility in the storytelling, which can cause some challenging mental gymnastics to make work.

(Super satisfying when it all works out, though, for both the reader and the writer.)

Another bonus of having a hard system is that, by knowing the limits of strength that the characters have, it can tend to raise the stakes of the story, allowing the magic to carry the climax in ways that are more unique to the individual story and world.


Some examples of Magic Systems that are closer to the Hard Magic System end of the Spectrum are:

-Allomancy, Feruchemy, and Hemallurgy in Mistborn, by Brandon Sanderson (Or anything in a Cosmere novel. Sanderson always leans toward Hard systems)

-Grit; in The Thousand Deaths of Ardor Benn, by Tyler Whitesides

-Essence and Kan; in The Licanius Trilogy, by James Islington

-All Magic in General/ 'The Art'; in The Dresden Files, by Jim Butcher

-Saidin/Saidar; in The Wheel of Time, by Robert Jordan

-Naming/all other forms of magic; in The Kingkiller Chronicles, by Patrick Rothfuss

In a Soft Magic System

The benefits of a soft system seem pretty obvious: the sky is the limit. You can do whatever you want, as long as you never said it was impossible. There are absolutely no limitations on what the magic can do.

The downfall of this, is that magic can start to feel like a plot convenience rather than a piece of the worldbuilding, and can become like a deus ex machina. Without understanding the limits of magic as well, it can lower the stakes for magic-using characters when they enter the conflict. Without knowing or understanding the specifics of a character's abilities, it can make a fight between two mages feel a bit flat rather than thrilling.

Some examples of systems that lean closer to the Soft Side are:

-Magic; in The Last Unicorn, by Peter S. Beagle

In recent years, magic systems have VERY ARGUABLY turned closer to being at the hard end of spectrum rather than the soft end. Part of this could be the advent of authors with complex hard magic systems rising to the forefront of modern fantasy  (Such as Robert Jordan, Brandon Sanderson, and Patrick Rothfuss, to name a few), though it is also just the way that magic in fantasy has begun to trend.

Though there is nothing wrong with a softer system, it just seems to be going out of style. Just the way that it goes. They can still obviously be extremely well done and successful, but they just don't seem to be as common as they once were.


So how do you choose which one to use?

Well, think of it this way: what role is magic playing in your world?

Is the magic a mysterious force wielded by a mystical side character? Do you need a wizard to barge in, cause some problems, and leave? Do you need the magic to fulfil a role of adding layers of mystery to your tale?

In that case, a soft system is really all you need. In fact, when it comes to making a mysterious power that sneaks its way into a story, the less you know about the magic, the better.

Is the magic integral to the main character? Is it a story of them learning to wield a great power? Is the magic a huge part of the world's culture and structure?

In that case, a hard system is probably better. The more you know and reveal about the magic, the more impact and creativity it can add to a culture.

(Also, as a side note, if you don't know what you want to do or how far to go with the magic, remember that it's easy enough to add more rules, and it's better to add rules than to become inconsistent.)


Anyway, that is what I have on some basic magic systems and their classifications.

Now go off, make your worlds magical, classify some magic, and have some fun.

The possibilities are, truly, endless.

Thanks for reading! If you enjoyed this blog, please help it on its quest for world domination by giving it a share on whatever platform you share such things on, and leave a comment if you feel so inclined. Thanks again, and have a lovely day!
Posted by Nicole Kapteyn at 18:55