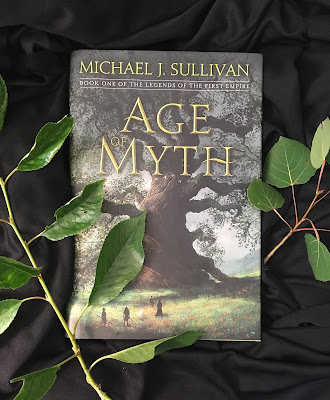 So, if you don't know (and, since I haven't talked about this on the blog before, most of you probably don't know), the author on my shelf who is most likely to be called my favourite is Michael J. Sullivan. Ever since I read his first series (The Riyria Revelations) and fell for his dynamic mercenary/thief duo, I was hooked on his writing.

And so, I eagerly have been buying every book he has put out since.

His newest series, The Legends of the First Empire, obviously falls under that category.

Last week, the newest book in that series, Age of War, hit the shelves. However, since I think it would be weird to start reviewing a series on book 3, I thought I would do something different.

Start on book one, work my way up to book three, and then review the rest upon their release in the next while.

You know. Stay up to date and all.

So, long story short, that's why I'm reviewing Age of Myth. The one that came out in 2016.

Let's get started, shall we?


Okay, so let's get the technical gobbledegook out of the way first.

Here's the description from the cover:


Since time immemorial, humans have worshipped the gods they call Fhrey, truly a race apart: invincible in battle, masters of magic, and seemingly immortal. But when a god falls to a human blade, the balance of power between humans and those they thought were gods changes forever.

Now only a few stand between humankind and annihilation: Raithe, reluctant to embrace his destiny as the God Killer; Suri, a young seer burdened by signs of impending doom; and Persephone, who must overcome personal tragedy to lead her people. The Age of Myth is over. The time of rebellion has begun.

As a bit of background on the series, while it does take place in the same world as Michael J. Sullivan's Riyria books, you don't need to read one series to enjoy the other. Particularly since this one takes place a few thousand years before the Riyria books. Also, anything you learn about the history covered in Legends of the First Empire while reading Riyria is shaky at best. Nothing is quite as it seems.

Basically, have no fear. There is no particular order required for full enjoyment.

One of my biggest fears when I first read this book was that, since I loved Hadrian and Royce in the Riyria books so much, that without those characters carrying the story I wouldn't enjoy it as much as Sullivan's other books.

Thankfully, I was proven wrong.

The characters in Age of Myth, though they didn't grab me quite as quickly as Hadrian and Royce, were interesting and fun to read.

Starting with the Fhrey, I would like to point out that these might be the most unique elves I have ever read. They weren't the sweet, peace-loving, tree-hugging elves that I have grown used to in other books. Instead, they were competitive, vain, arrogant, had a severe superiority complex, and were surprisingly cruel and vicious. They had a unique and well-crafted society, and brought about an interesting set of conflicts that comes from a society that encounters little change over the centuries.

Also, they were the first elvish characters I had read that had a wide range of body types. Thought that was an interesting and refreshing change.

How about the human/Rhune characters?

Raithe, the God Killer, makes for an excellent reluctant hero, with clear motivations for his desire to avoid heroism (in spite of being dragged into taking up the heroic role time and time again.) His main travelling companion, Malcolm, is absolutely hilarious, and quickly took his place as a personal favourite in the series.

The mystic, Suri, was a neat take on a druid type of character, which isn't a type that I find I see often. She was quirky, interesting, and a fun perspective to read from.

The character that surprised me the most in Age of Myth, however, was probably Persephone.

Usually, I'm not a huge fan of many female characters. I often find them difficult to relate to, boring to read, or just plainly less interesting than the male characters.

Persephone, however, I actually really enjoy reading. She was complex, strong, wise, and actually had the guts to stand up and get stuff done. She didn't complain about the work - she took the influence she had, even when it was breaking, and took control of the situations the best that she could. Tragedy didn't turn her into a victim, and terrifying circumstance didn't make her back down.

One of the most unique parts of Age of Myth, I found, was actually the setting.

Though it took place in the same land as the Riyria books, it is set two thousand years earlier. Instead of just making the world a 'dark ages' style world, Sullivan actually rewound time. There are no cities or trade. People live in clans. Most technology hasn't been invented yet, superstition is everywhere, and the world actually feels like Elan taken back in time. It created an awesome contrast between the primitive lifestyle of the humans and the luxury of the Fhrey, and really helped distinguish the cultures once they began to collide. It was a new flavour of fantasy for me, and I thoroughly enjoyed it.

The plot of Age of Myth is simple enough, and isn't particularly complex. However, every event in this book is hugely important to the series. At this point, I have only read the first two books, and the things that happen in Age of Myth truly act as the catalyst that launches the entirety of the main conflict of the series. As the first book in a series, it neatly sets up the rest of the story, introduces characters, and begins to unveil Elan in a time that is completely different from anything else that had been seen before.

Do I recommend it?

Age of Myth is a great start to a unique and interesting series, and is a wonderful addition to any fantasy lover's collection. It explores thought-provoking themes and brings a new take on timelines and history in a fantasy world. Michael J. Sullivan's writing style is easy to read and feels accessible without sacrificing storytelling and themes. It's a good story for both people who are experienced with the genre and those who are new to fantasy. Go check it out if you're interested.

Anyway, that's all I have for today. Thanks for reading, and I'll see you next time!
Posted by Nicole Kapteyn at 17:50