The Defeat Your Villain Deserves 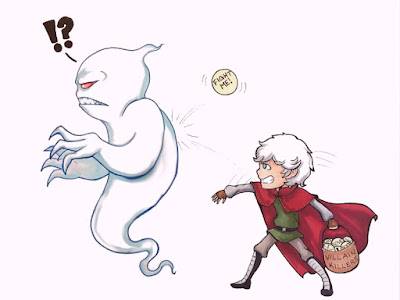 There's a villain on the loose!

How are you going to do it?

...and the silence drops.

This is a problem that I hope isn't personal to just being my writing problem, but I'm going to talk about it anyway. So you make an awesome villain. Check! You give them terrifying powers. Check! They seem unbeatable, a perfect challenge. Check!

This villain is UNIQUE to your story.

Well, now what? You need to beat the villain somehow.

What do you do?

There are many options: just kill them, find a kryptonite, banish them, send them to jail.

For Fantasy and Sci-Fi in particular, the possibilities are endless. Is there magic in the world? Are there downfalls to the magic that can be exploited? What kind of weaknesses can be brought about by their strengths in their respective worlds?

As much as I love a great fight scene as an ending, sometimes a simple fist or sword fight can become tiring if it's done too often. For a climax in particular, there is also the added pressure of it being the FINAL FIGHT, meaning that it needs to stand out from all the others. In an action-packed story, to just have another run-of-the-mill fight as the finale comes off as underwhelming.

1. Use the Specifics of your World to your Advantage

The purpose of Science Fiction and Fantasy is to showcase the endless bounds of imagination. You can do literally ANYTHING in these genres. You can make any world, any magic system, any creature or technology or ability.

So it's a bit understandable why people might be a bit tired of simple fight scenes making up the landscape of villain battles.

How disappointing would it have been in Harry Potter and the Order of the Phoenix if when Voldemort and Dumbledore met they had just decided to go fisticuffs instead of duelling with magic? (Yeah, not the series' final fight, but it's still the final fight of book 5.)

What about if in Mistborn, rather than fighting the Lord Ruler with allomancy, Vin had just decided to punch him instead? Or if, rather than needing to destroy the One Ring of power in Lord of the Rings, the fellowship just needed to saunter up to Sauron and hit his tower a couple times with a sword?

Suddenly, these fights and climaxes that are so tense and interesting in their respective stories become boring, don't stand out, and actually degrade both the hero and the villain at the end of the story.

However, because these fights used the worldbuilding and specifics of their magic systems and established abilities, these climaxes and final battles become memorable and interesting, standing out for fitting in with their own worlds.

One of my favourite ending fights is actually in Warbreaker, by Brandon Sanderson, because the established magic system is used in a creative way against the villain, in a way that no villain in any other world could have been defeated. It was unique, because it was world specific.

Meanwhile, one of the final fights that disappointed sci-fi fans the most was the ending to the Matrix trilogy, when Neo and Agent Smith fought. Why was that? Well, if you don't know the series, Agent Smith had taken over the entire Matrix. There were literally millions of him.

What did the fight come down to? All of the Smiths standing around as a completely uninvolved audience while Neo and one Smith battled. The fight was still interesting enough to watch, but when so much had been suggested and built up with Smith taking over the world, a one-on-one fight didn't cut it when the filmmakers could have had a one-million-on-one fight. They set up a cool climax, had a cool idea, and then abandoned it for the mundane.


2. Establish the Abilities of the Hero and Villain

This doesn't mean telling all of the secrets of the hero and villain. You can still hide some awesome abilities in them.

B) A hero that can lift a truck with one hand VS a villain who is strong, but you don't know how strong.

Odds are, you have an understanding of the hero's power, considering that they are the character with the most page time. By understanding their power and limits, it adds tension the final fight scene, especially if we can assume that the villain is at least as powerful as the hero, if not more so.

However, how much more interesting does the final fight become if we actually get a glimpse of how strong the villain is?

What about if the hero tries fighting the villain once before, and gets nearly destroyed? What if there are at the very least rumours of the villain's power, something to show why this villain is considered fearsome?

The main thing, though, is that if a villain is built up to be extremely powerful, that MUST be proved in the final fight. Is this character a nearly-flawless magic user or swordsman? PROVE IT IN THE FINAL FIGHT.

Don't let your villain be all talk. Give the rumours weight.

This can be said for an entire story, but consistent tone is key.

Is your villain ruthless and evil through the entire story? They most likely WILL NOT have a change of heart halfway through the final fight.

What do I mean by this?

I mean 'Power of Love Ex Machina'. The villain suddenly growing a heart during the climax. The 'Le Gasp! I never knew that I was evil! I hurt people! Oh no! I better self destruct/give up on my dastardly ways now!'

It's usually not in so many words, but that's the gist of it.

If you can't tell, the whole 'defeat the evil force with the power of love' trope is something that I really can't stand. Usually, it's because the villain in question is set up to be an absolute badass, and then they are foiled by the feels. And if they aren't foiled by the feels themselves, they are foiled by the hero having a sudden thought that 'hey, the world is garbage! There is nothing worth fighting for! No such thing as innocent people! Oh, wait, love exists! Better kill this fool with ALL THE LOVE!'

Not even Care Bears defeated their villains with feelings, and they are literally called THE CARE BEARS. They would save the kids, then blast the life right out of the villains.

Is your villain pure evil? No redeeming qualities? CONVICTED in their actions?

Sorry, I don't believe that love is going to stop them.

Will the hero show mercy? Depends on the hero. Show us beforehand. Show us that the hero is a merciful character.

Will the villain turn from villainy? Foreshadow. Show the possibility that they may change their ways.

Don't try to convince me that a character who is let on to be as twisted as the Joker is going to suddenly change his mind halfway through the climax.

Prove things through character action and motivation if you are going to do something involving the feelings in the climax. Keep tone consistent.

Give your villain the defeat that they deserve. Use your world to your advantage. Keep them in character.

Show what the hero is up against. Give us context.

There's a villain out there.