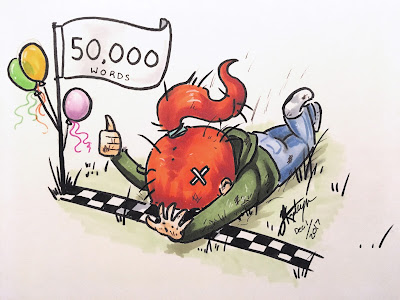 THIS BLOG IS ONLY TWO WEEKS LATE AFTER A MONTH OF ABSENCE!
HOORAY FOR CONSISTENCY!

Anyway, back to the subject of NaNoWriMo! It's over. YAY!

Which begs to question...did I actually succeed?

This seems way more difficult to answer than it should be, but I don't know if I actually 'succeeded' with my first NaNoWriMo.

However, I do not have a completed first draft. I am in the third act of the draft, yes, but it is not completed.

And I can already see structural issues that will be fixed in revision.

And there are scenes that need to be inserted and removed. (Again, something that is usually fixed in revision).

But, even so, I do not have a complete first draft, which was my personal goal.

So, did I succeed at NaNoWriMo?

Well, in some regards, I didn't.

In other regards, I think I did. I went into this as a learning exercise, as a way to learn more about how I write, how to write faster, and what my process is.

(Part of why I'm really noticing this kind of thing after NaNoWriMo is that I haven't actually written a brand new first draft of a story in...quite a while. I've been mostly working on really heavy revisions on two other books that DESPERATELY needed pretty much a full rewrite to make them work. So it's been a while since I've actually written a first draft of a book. I'm still kind of in revision mode...)

I'm going to focus on the positive side of this.

Here's what I learned from my first NaNoWriMo experience. I know this is just for my own personal writing style, but maybe it would be helpful for other people to see different writing processes. Maybe someone else writes like this, too.


One piece of advice I have seen a lot is that, in editing, a writer should cut out about 10% of their book. Writers tend to write more than what is necessary, and they need to cut out a lot of unnecessary dialogue.

And yes, I have had beta readers look over my completed work, and usually what they request is that more is added, too. This isn't just me being insecure.

I write the most basic form of a story, see what is missing (usually the scenes between scenes, character development, foreshadowing...you know, the 'glue'  scenes that keep a book structured) and go from there. I find what subplots would naturally fit, adjust existing points, and tend to add a whole lot of word count to a first draft.

This doesn't mean I don't delete anything. Rather, it means the opposite.

I delete the things that derail the story, but the amount of words that get put in to fill in plot holes to make the story work in a cohesive manner tend to add considerably more words than what were deleted.

That's not mentioning the missing environmental descriptions that seem to be cropping up in this NaNoWriMo book in particular...


2. If I have a scene or detail that I know needs to be fixed, and that I know is wrong, I need to fix it before moving forward.

I don't consider this to be the same as editing work before I'm done the work.

This is just attempting to keep continuity in a single work as I'm working on it. If there's a problem, I want to fix it. If something is wrong, and I know it's wrong, I like to fix it or check it while I'm thinking of the problem rather than later, when the problem is liable to be forgotten (even if I leave a sticky note to remind myself.)

It's stuff that can be picked up in editing, but the less work I have to do in a bulk edit, the better.

If the last scene I wrote in a book is completely off, I need to get rid of it. This makes it a pain when you have a word count goal and then end up deleting a day's work in order to continue onward, but after trying to continue with a wrong scene for a couple days and losing a couple of days of work because of it, I'd rather delete a scene before it causes too many problems.


3. Apparently, I'm not too good at following my own outlines

I know this isn't an exclusive problem, but it's one that I really came across since I actually planned this book out.

I followed the outline for the most part, but then things just went...weird.

Let's just say that I changed my outline several times while I was writing, as new ideas popped into my head, and new problems arose as I was working on the book.

I know that it's a common problem, but I hadn't known whether or not I could follow an outline faithfully as a plotter.


4. Word Count Limits are considerably harder than I thought

In saying this, I don't mean deadlines.

What I mean is looking at a story and not letting it be the story that it wants to be.

This was the largest problem I found that I actually faced with NaNoWriMo. I felt so preoccupied with the word count that I lost what the story was trying to be. What the story needed to be. I tried time and again to find tricks to get past this: Focussing on themes, focussing on plot, ignoring issues, but nothing was working.

The story wanted to be something, and for whatever reason it was causing some kind of conflict in my mind.

I have no idea what the reason for this was, and I hope I'm not alone in having a story trying to be something other than what I was trying to force it to be.

In short, though, am I glad I did NaNoWriMo and reached the 50,000 word goal?

I was able to explore a new idea. I was able to try out some new things, and it was fun to try to meet the challenge. It was good to learn things about my writing style, too. I've also found that my regular word count has increased, which is always a bonus. Yay!

Will I do it again?

Anyway, those are some of my thoughts on my personal NaNoWriMo experience, as a first-timer. I know this was a more personal opinion and experience kind of blog, but I should be getting back to regular content again soon.

Talk to you later.
Posted by Nicole Kapteyn at 21:01