Writing Assassins: Five Questions to Ask When Making a Killer 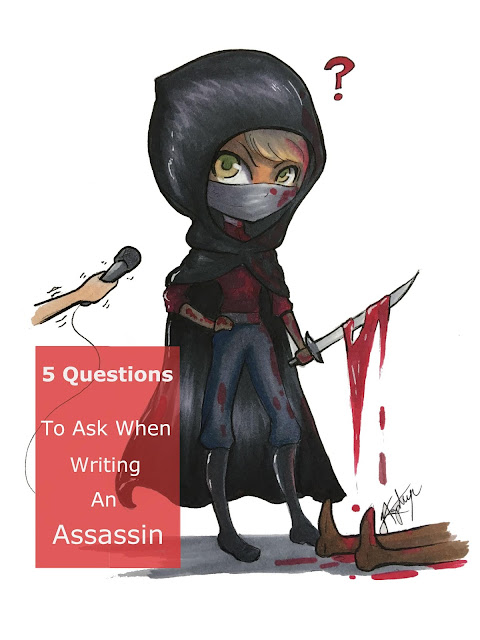 I mean, just think about it. Who doesn't want a story where a threatening, morally dark, often enigmatic character appears to turn the tables or rattle the cages?

Assassins have particularly seemed to become popular in the past couple decades, stealing their way into our hearts and heads alike with their dastardly deeds, wicked wit, and often antagonistic/anti-heroic antics.

With hundreds of stories from Nevernight to Night Angel, John Wick to Assassin's Creed, or Shadowdance to The Farseer Trilogy, assassins have come to infect our media with stabs and shots, and it's a wonderful thing.

So that brings us to the topic of today's blog: how do we write one? How do we make a convincing assassin character?

Well, like all characters, it comes down to this:

It's time to sit that character down, and start interrogating them.

Or, maybe it would be better to politely interview these ones from a distance. You know. With them being assassins and all. Probably better to stay out of reach...

Anyway, here are five questions to ask when writing an assassin character.

If you're inserting an assassin into a pre-built world, this shouldn't be too difficult to answer. If not, well, it's time to get worldbuilding.

Everything in the culture is going to effect how this assassin operates. How is death viewed by the populace? What is the climate like? What materials for weapons are available? Are there grand cities, or is everything mostly wild lands? What is the political climate like? How does religion and superstition factor into the lifestyle of the regular citizens of this world?

Get creative with your worldbuilding, and see where that assassin's place starts to land.

This is an extremely important question, as it shapes the character's morality.

Does this character kill for justice? Are they a slave, or forced into dealing death through some other means? Do they see it as an easy paycheck? Are they a psychopath? Do they kill for religious reasons? Are they under the command of a government of some form? The motives behind the character's actions can be as limitless as your imagination.

The morality and their reasoning behind their actions will shape their entire psyche, and even their methods.

(An excellent series that displays how a character's motives shape their methods is Arc of a Scythe, by Neal Shusterman, which currently consists of Scythe and Thunderhead. Technically, the Scythes aren't assassins, but they are similar enough that the comparison works. Also, excellent series. If you haven't read it and want to see some really interesting methods of dealing death and just a great story all around, check it out. As another point, I have a review of Scythe on this blog right here)


#3: How Long Have They Been An Assassin?

This is quite important. Is this character a renowned killer, or are they just at the beginning of their bloody journey?

A character who is experienced will react differently to a wide variety of situations than a novice will. If you know how far in their assassinhood they are, you can better inform their choices, tics, and patterns.

Is there some kind of assassin group that this character is a part of, or do they go on their own to commit their murders?

If they are alone, they have to do a whole lot more for their kills, including dealing with the business side of things, gaining a reputation without any backup, staking out targets, using their own informants, and having a web of people that they use to get other jobs done.

(Another one that isn't about an assassin but really shows how the business and planning side of a devious plan can go is The Thousand Deaths of Ardor Benn, by Tyler Whitesides. Really good example of the kind of people that a criminal might need to employ/work with to get a job done.)

If your assassin is part of a group, here are some things to consider:

Does the group have a partial commission on each kill? (Think Unions) What kind of position does the assassin have in the group? What conflicts are happening? Is there competition between assassins? Does the group partake in other business aside from murder-for-hire? What benefits and drawbacks happen because of the group? What kind of security does it give? Do they have group-assassinations? Do the assassins have a choice in their targets, or are they simply given assignments to fulfill?

The bureaucracy of an assassin group is definitely something to keep in consideration when building a guild, and can bring about a really interesting dynamic if done well, as much work as it may be to craft.


#5: Melee, Poison, Or Sneak? AKA, What Is The Preferred Method Of Killing?

This is the fun question. Your character has been given license to kill, so how are they going to do the deed?

There are many, many, MANY options, and, depending on the worldbuilding, there can be many options that are completely unique to your world.

Does your world have magic? Use it.

Is there a mix of poisons? Use it.

How about different weapons or diseases or fighting styles or racial differences that can be exploited in an assassin's favour?

There are more ways to kill than just stabbing and shooting, so don't be afraid to get creative with your assassin. Your assassin is unique, so why shouldn't their method of killing be unique as well?

(On that note, don't be afraid to research weapons of all kinds and origins. The internet is there at your fingertips. Use it.)

Anyway, those are five questions to ask yourself when writing your very own assassin character. If you enjoyed, give the blog a comment and a share. Helps out a lot!

Have a great night, and I'll see you again soon.
Posted by Nicole Kapteyn at 13:18