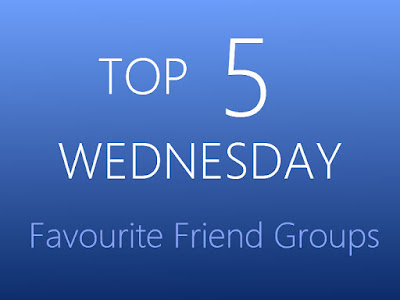 Hello, everyone! Happy Wednesday to you!

...or Thursday...I didn't quite get this post finished at a reasonable posting time yesterday...

HAPPY BELATED WEDNESDAY TO YOU!

So for the past while, I've been seeing a thing called 'Top 5 Wednesday' on YouTube. When I saw that it was an open-to-join group on Goodreads, I thought I'd join in.

(You can check the Top 5 Wednesday group out right here if you like.)

Basically, the gist of it is that every Wednesday there is a new prompt for a top five list, and everyone does a list of their picks for their top five.

Today's topic is, as you can probably see in the title, the Top Five Favourite Friend Groups. People are allowed to take from all media for these prompts, but I want to keep the actual lists book-centric. I will have a couple honourable mentions, though.

So, without further ado, here are my picks for my Top Five Favourite Friend Groups in books.

This group was honestly the first one to come to mind for me when I started thinking about this week's prompt. From the first time you meet them in The Way of Kings to where they are now in Oathbringer, Bridge Four really is a group of comrades who stay together through hell and high water.

Even going from the lowest of the low as slaves and working their way up to their current status (Spoilers, sorry), they don't grow apart. Instead, these are characters who shine as they simply grow closer together. Each one brings a unique aspect to the dynamic of their group, and it easily makes them one of my favourite ensembles of friends to follow.

Couldn't do this list without including the original epic fantasy group of friends, the Fellowship of the Ring.

Of course there are the smaller groups within the fellowship that have great chemistry: the hobbits, Aragorn, Gimli, and Legolas, that kind of thing.

However, the group I mean is the Fellowship itself. All nine of them.

There's something really special about how this group interacts in both the books and the movies. They work well together, they fight well together, and they are there for one another through thick and thin throughout their journey, until circumstances force them apart.

It's a brilliant friendship that keeps them together, even shown through their concern for one another once they are separated and in the joy of their reunion.


3. Davian, Asha, and Wirr; The Licanius Trilogy, by James Islington

This friend group actually does extend past these three, but they are the core group at the beginning of The Shadow of What Was Lost, the first in the trilogy.

The interesting thing with this friendship is that the three of them aren't usually all together. They are often out with other groups, travelling or working with other people in their respective areas.

I probably could have chosen any of their MANY groups to add to this list, and the bond between these three is really the smallest friend group of the series, but my favourite friendship here is really the one between the three of them. Even as they go on their separate ways, every time they meet up the friendship between them remains as strong as ever, even as they are changed by the situations forced upon them.

The Yellow Hoods is a little club of children around the age of twelve that start off as three, but the group grows as the series progresses and they make more friends.

(The series itself is a self-published middle-grade series that the author describes as 'emergent steampunk', which basically means it has the technology being developed throughout the series. It's a fun one. Check it out.)

These three are adorable. And, even better, these three are adventurous inventor kids. They are constantly innovating, creating, and inventing new ways to use technology on their adventures, and - even better - reading this group feels like reading a group of children.

It's SO FUN reading these kids making inventions not for the sake of making some huge change in the world, but for the sake of having a good time on their various misadventures. Even as things get more serious and they are forced to grow up to suit the times, they still feel like children. It's a wonderful feeling, and a sweet friendship between them.


5. Kvothe and his circle of friends; The Kingkiller Chronicles, by Patrick Rothfuss

Of course Kvothe and his University buddies had to make an appearance here. Now, not all of his friends know each other (literally none of them know poor Auri), but there's something special about Kvothe's friends. He has many friends at the University, and it makes an interesting circle of characters to hang out with.

They each bring something new and fun to the relationship, from Sim and Wil's banter, Fela's flirting, Denna's mysteriousness and Auri's adorable quirks, as well as the contributions of many, many more, every character adds another facet to the relationships that Kvothe has and the experiences throughout his time at the University.

Besides, without his friends, who would tell him about the creepy guys who stare at him in bars behind his back?

So, as I said at the start, I wanted to add a couple honourable mentions for other mediums that I really love. Therefore, I'm going to do one of each: Movies, TV, and Video Games.

I mean, come on. It's the Goonies. They're iconic. It's childhood embodied. Once a Goonie, always a Goonie.


T.V: The Scooby Squad; from Buffy the Vampire Slayer

Through thick and thin, this group is fantastic. The banter, the adventure, the general zany quality...

Yeah, these characters are a blast to hang out with. They pack an emotional punch, they bring the laughs, and they are pure 90's-early 2000's cheesy fun.

I know they never get officially called the Chocobros, but once I heard the name for them I just started loving it.

This little gang is what got me going back to this game again and again, and their friendship is what made me love them.

So, that is my list for my Top 5 Favourite Friend Groups! AKA, my first Top 5 Wednesday! Woohoo! Do you share any of my picks? What are some of your favourite friend groups? Leave your thoughts down below, I'd love to hear them!

Anyway, hope you enjoyed it, and I'll see you in my next post. Talk to you later!
Posted by Nicole Kapteyn at 18:07