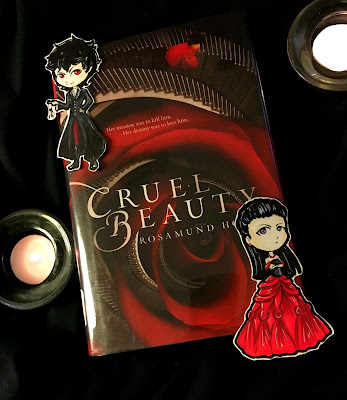 Ahem. Anyway, this is going to be a review of Cruel Beauty, by Rosamund Hodge.

I know that this isn't exactly a massively popular book, and that it's one with fairly mixed reviews, but here's why I chose it to be the first one:

This book intrigued me when I first saw it announced back in 2014 (I think I saw it on Goodreads), and its concept has kept me kind of eyeing it ever since, in spite of the mixed reviews.

If you haven't heard of it, the concept tagline I saw was something along the lines of this:

What if  Beauty was an assassin sent to kill the Beast?

Oooooooooh. How could I not be interested? I enjoy fairy tales with a twist. I was enjoying Once Upon a Time when this book came out, one of my favourite childhood series is The Enchanted Forest Chronicles by Patricia C. Wrede, which is basically a comedic crossover of fairy tale concepts (and, if you haven't read them, please read them. They need ALL THE LOVE).

This should be a winning formula for me.

Which is why I got quite excited when I saw it at the library and took it out.

By the time I read this (as context), it had been out for a while. I had read a review or two, read a sample. I knew a bit of what I was getting into.

So, I went in with no expectations aside from a fun time.

Did I have a fun time?

We'll get into that soon.

Here is the description from the cover:

Since birth, Nyx had been betrothed to the evil ruler of her kingdom - all because of a reckless bargain her father struck. And since birth, she has been training to kill him.

Betrayed by her family yet bound to obey, Nyx rails against her fate. Still, on her seventeenth birthday, she abandons everything she's ever known to marry the all-powerful, immortal Ignifex. Her plan? Seduce him, disarm him, and break the nine-hundred-year-old curse he put on her people.

But Ignifex is not what Nyx expected. The strangely charming lord beguiles her, and his castle - a shifting maze of magical rooms - enthralls her. As Nyx searches for a way to free her homeland by uncovering Ignifex's secrets, she finds herself unwillingly drawn to him. But even if she can bring herself to love her sworn enemy, how can she refuse her duty to kill him?

The book is 342 pages long in hardcover format (not sure what word count that would be, but you get the picture). It's written in first person POV from the viewpoint of Nyx.

This book was published by HarperCollins in 2014, and was Rosamund Hodge's debut novel. Before publishing Cruel Beauty, the bulk of her work was in writing short fiction, which you can learn more about on her website at http://www.rosamundhodge.net/

Okay, now to the review.


Here are my thoughts:


This book was...fun. I read it in a couple of hours (but I find YA extremely quick to read, so that came as no surprise to me), and I found that since I went in with no expectations, it was an enjoyable enough story. There were some interesting ideas presented, the setting had some creative elements with the castle having thousands of shifting rooms, and I found Ignifex to be a particularly interesting and funny character.

On the subject of characters, though I did really like Ignifex (he really made the book for me), I did find Nyx to be very inconsistent with her choices and actions. One moment she would be saying one thing, and the next she would be convinced that her world revolved around the opposite. There were several times that her character transitions, though they should have felt natural, felt indecisive. However she did have some really interesting aspects (such as resenting her family for forcing her into marriage to the Gentle Lord), and there were some really good individual scenes with her, particularly when she was interacting with Ignifex.

Let's talk about that love interest for a moment.

He was hilarious. To be honest, his character was more of a Rumpelstiltskin style character than 'Beast' kind of character. Since I hadn't expected it, it came as a welcome surprise. He was clever, charming, and had a bit of a dark side to him as well, though there was a slightly tragic edge to just about everything that he did.

The writing, unfortunately, I did find quite clunky at times. The worldbuilding could have easily been spread out throughout the story rather than shown through exposition from the get go, and there were quite a few times where I had to backtrack a few sentences or pause to try to figure out what exactly was going on.

There was also the matter of pacing. I really would have liked to see this with another fifty to one hundred pages, to let events sink in and really develop organically. A lot of the individual scenes I found to be really cute or interesting, but as a whole there was a lot that felt unexplained or disjointed due to the pacing issues. This is likely because of Rosamund Hodge's past experience being in short fiction, so I don't find it to be too much of an issue.

One thing that did really surprise me in a good way was actually the lack of sexual content in this book. I'm not huge on books that get explicit, and considering that this was a 'dark reimagining' of Beauty and the Beast, and I had heard of how smutty many YA books have been in recent years, I was really surprised at how clean this book actually was. There was a lot of banter, stolen kisses, mentions and conversation about sex, and a bit of lusty thought, but nothing ever got explicit, which was quite a nice change from the expected.

Do I recommend it?

Actually, yes. Though I don't find it the most developed fantasy, it is a fun little jaunt into an interesting castle with some cute romance. There were some unique concepts presented, and it had an interesting world.

I would be curious to see some of Rosamund's other work after reading this, especially since this is just a debut, and she has likely learned quite a bit in the past four years since Cruel Beauty's release.

Anyway, that wraps up my first review for the blog. If you enjoyed this review, feel free to leave a comment and share.

Talk to you later!
Posted by Nicole Kapteyn at 19:40