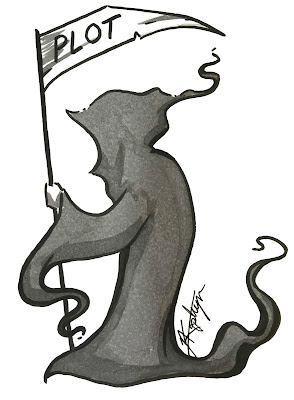 It sure does suck when a favourite character dies, doesn't it?

I mean, there's not many feelings quite like it. You're just sitting there, reading or watching or gaming, and then suddenly POOF! Character dead. Gone. No more.

All it takes is a snap of the writer's fingers, and a favourite character is forever written out of the story, never to be seen again...

AHEM. Returning to the point of the blog...

As much as it can hurt to have a character die, admittedly sometimes there are character deaths that are just...well...

Let me put it this way: As much as I know I should be caring about the character dying, all I feel is something along the lines of "Meh. Guess that's that."

Kind of surprising how often this happens, now that I think of it...

So that got me thinking. What separates the deaths that make me go 'meh' from the deaths that tear my heart out, stomp it into tiny pieces, and then offer it back to me in a mess of broken shards and sticky glue?

Well, I have a theory that might shed a bit of light on the subject...

It's all in the Emotions.


There's a famous quote from Robert Frost about writing that goes a little something like this:

This is a quote that I really do agree with. Boiled down, if the writer feels nothing, then how can we expect a reader to feel anything?

However, for this blog, I'm going to put a bit of a spin on this quote.

If the characters don't care, then why should the reader care?

This, to me, is the biggest thing in making a death scene have impact.

Basically: it isn't the fact that a character died that is sad, it's the way that the character's death effects everything else.

Imagine watching The Lion King and you get to the part where Mufasa dies. I mean, the scene itself is kind of tragic, right? You see him learn that his son is in danger. He races to the rescue, grabs Simba, and gets him to safety before being swept away by the stampede. Then, triumph! Mufasa surfaces, and there is a moment of relief.

Then, as we all know, we see Scar betray his own brother and throw him to his death. You hear him scream, and you hear Simba scream as he watches his father disappear into a mess of dust and hooves.

That's not the part people cry at, though. It might startle some people, it might scare some kids, but it isn't what makes people cry.

What makes people cry is the aftermath, as you see little Simba crawl down from the rocks.

And he sees his daddy lying there, not moving.

And he goes up to Mufasa, not understanding what's happened and yet knowing that something isn't right.

His dad isn't going to wake up, and he sees it as his fault.

That - the scene where you see Simba pleading for this all to just be a bad dream - that is what makes people cry.

It's the same thing with Bambi, with the death of his mother. It isn't the gunshot that makes people cry - it's Bambi calling for his mother to find him, only for her to not be there, and he doesn't understand why.

Imagine if these scenes didn't have the aftermath. If Simba didn't find Mufasa's corpse and tried to wake him up before being exiled. What kind of impact would that have, then? Probably very little. It would have just been 'Oh. Guess he's dead now. Alrighty. Moving on.'

Instead, what we get is a death scene that is considered one of the most heart-wrenching death scenes in animation.

However, this leads to something else...

Let's look at another example.

Doctor Who, the post-season four specials, with the regeneration of the Tenth Doctor.

If y'all have watched this, then you already know.

Basically, the Tenth Doctor's regeneration is considered one of the most emotional death scenes in television history, and he dies alone.

Of course, the fact he is leaving at all is quite emotional  - we spent three seasons with Ten, and he was brilliantly portrayed by the wildly talented David Tennant.

That's not what makes it emotional.

What makes it emotional is, this time, the set of scenes leading up to his death, as opposed to the aftermath.

If you haven't seen this sequence of events or watched Doctor Who, basically we knew that his death was coming. It had been very well foreshadowed, so you knew it was happening. Yet, throughout the post season-four specials, we see the Tenth Doctor go through avoidance and denial about his death. He's terrified, and he's doing his best to run away from his fate.

The climax of his final episode happens. He faces his enemy, and he comes out victorious. For a moment, you see him feel nothing short of relief.

Then he sees that his friend is going to be killed by radiation poisoning.

You immediately see him know what he has to do, and it terrifies him. He starts railing against what he has to do, screaming that it isn't fair. That he can do so much more if he lives. That his friend - who is an older man - has already lived a long life. He desperately tries to talk himself out of it, but comes to the conclusion of what he has to do regardless.

So he trades places with his friend, and takes the lethal dose of radiation.

Afterward, you just see him live out the last hour or so of his life, silently travelling to take an unseen look at his past companions. Some of them notice him, others don't, as he wants one final look.

Then he enters his TARDIS, flies it away so that it won't destroy everything around him when he regenerates.

Everything is silent, and the moment before he lets the radiation kill him, you see one last flash of fear cross his eyes, and he shakily whispers his infamous last words.

You can hear the sound of shattering hearts resonate through the earth as whovians worldwide are emotionally destroyed.

The point is this: when there isn't a character nearby to react to a character dying, then show the character reacting to their own death.

It can be any kind of reaction, and depends on the character. Do they rage against their fate? Do they accept their death with open arms? Are they numb? In disbelief?

Show emotion. Show how they feel about dying.

Show the moment when they realize what is happening. The numbness. The pain. The cold. The fear. In some characters, perhaps the relief or the acceptance of the situation.


SHOW THEM FEELING SOMETHING.


I CAN'T STRESS THIS ENOUGH.

Make your readers believe that a character just lost their friend. Their sibling. A parent. A child.

CONVINCE THEM through emotion.

This is where show don't tell comes in. You can't technically show them freaking out the way a visual medium can, but you can do one better than the movies.

You can show them the emotions.

A movie can only show what's going on in a character's mind through dialogue and visual cues.

With a book, you can one-up them.

Your character doesn't need to say 'I feel cold'. You can show it through their impressions as they die. You can use sentence structure and pacing to show feelings like panic and anger and acceptance.

Believe it or not, this doesn't just go for heroes. It also goes for villains.

As in, the first Iron Man.

Technically, the death of Obadiah in Iron Man should have been one of the most heartbreaking moments in the movie.

Don't believe me? Consider this: Obadiah was practically a father to Tony. He was the one who acted as a guardian, confidant, best friend, and business partner, and yet when he dies Tony has no reaction. We don't see anything in the aftermath. No emotion. No internal conflict when it comes to fighting one of the people that he had trusted the most in the world.

And so, Obadiah became the first in a long, long line of throwaway Marvel villains. Tony Stark just brushes it off like a psychopath, and moves on. No mourning. No internal conflict.

Imagine what it would have been like if Obadiah's death had been given the emotional weight that it deserved. This wasn't Tony just fighting an unknown man like Whiplash - this was Tony killing a close friend.

Don't let your death scenes be like those that are afforded to the throwaway villains.

The villain is one of the most important people in your book. They are one of the drivers of the story. Their deaths should have just as much impact as the death of a hero.

But what if the death is off-screen or, in a book's case, off-page?

Good news: you don't even need to show the death itself in order to make it emotional, but the reaction to the death can make it have all the emotional impact you need.

There has been only one death scene to ever make me cry in a book. Have I teared up slightly in others? On occasion. This death, however, had me crying.

It was a death that wasn't even shown on the page. You see the lead up, and you see the aftermath.

That is the power of emotion added to a death scene.

That is how you give a death scene impact.

Of course, there are other factors, such as build up, commitment to actually killing characters and not reviving them, giving the death meaning, etc;

However, to me, this really is what will give it impact.

So how do you learn to do this, then?

Practice. Study powerful death scenes. Look deep into what is actually happening. Ask yourself what makes the death scene impactful. Test these things out.

Go be the vicious author that we all secretly admire.
Posted by Nicole Kapteyn at 15:12