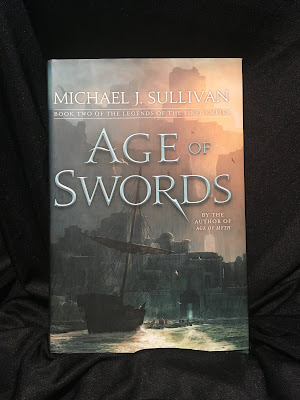 Several months ago, I said I would review the Legends of the First Empire books, and keep up as each one comes out.

I'm not going to get into spoilers, so don't be worried about that. Also, if you haven't read my review for the first book, Age of Myth, check it out here.

Ayway, let's get on to book 2 of Legends of the First Empire.

This is my review of Age of Swords by Michael J. Sullivan.

Here's the synopsis from the cover flap:


Raithe, the God Killer, may have stated the rebellion by killing a Fhrey, but long-standing enmities dividing the Rhunes make it all but impossible to unite against the common foe. And even if the clans join forces, how will they defeat an enemy whose magical prowess renders them indistinguishable from gods?

The answer lies across the sea in a faraway land populated by a reclusive and dour race who feel nothing but disdain for both Fhrey and mankind. With time running out, Persephone leads the gifted young seer Suri, the Fhrey sorceress Arion, and a small band of misfits in a desperate search for aid - a quest that will take them into the darkest depths of Elan. There, an ancient adversary waits, as fearsome as it is deadly.


AND NOW, THE REVIEW!

Considering my enjoyment of Age of Myth, Age of Swords had some decent expectations to live up to.

Thankfully, it didn't just live up to my expectations: it by far surpassed them. And, not only did this book pass my expectations - it actually surprised me.

Now, here's the thing: I didn't find there were any huge twists in the book. That's not how it surprised me.

What surprised me were the characters and the tone.

In this one, I couldn't wait to get past the male characters and get back to the ladies.

Part of this could be chalked up to the fact that the women were the ones actually moving the plot forward, but the larger factor is that they were just the most interesting characters in the book. The relationships between the women, their ingenuity, and just their overall likeability made them my favourite points of view to read from.

In particular, in this book I loved Persephone. She was a woman who saw what issues were happening, and took charge to fix problems instead of waiting for someone else to do it. Instead of going 'oh, I don't know if I can do it', she just went 'screw it, nobody else is doing it, so I'm going to get the job done!'

It was a breath of fresh air, particularly considering that, though she wasn't always feeling qualified, she still had the confidence and stepped forward as a leader when occasion called for it. She didn't act arrogant, she didn't act self-important, she just got the job done and was motivated by her concern for the well-being of her people.

The other women, of course, were also fantastic. Moya was witty and didn't let people look down on her for being a woman, even as she became a warrior against the cultural norm. Roan was sweet and inventive. Suri was uncertain of herself, but clever and curious about the world. Brin was brilliant and saw things that nobody else did. Arion was wise and gentle.

Every woman in this book made hard decisions and worked their way to where they were, standing strong and supportive with one another. They were independent and strong without having to constantly 'prove themselves better than men' the way that so many female protagonists do. They weren't all talk about how good they were - they just went in, go the job done, and proved their badassery on their own merit.

Okay, so the women were obviously a high point. What about our leading men?

Well, a lot of them mostly stood around talking and arguing. But the two that I really enjoyed above the rest were: Gifford and Malcolm.

Gifford is a man born crippled, with a severe limp, speech impediment, a tragic backstory, and one of the sweetest personalities in all literature.

He's a gifted potter, and is just plainly adorable. He does his best to be kind to everyone he meets in spite of the abuse he often suffers for it. He's willing to sacrifice himself for the people he cares for, and he just wants the best for everyone around him. Loved the sweet little guy.

Malcolm I love for a couple very odd, very specific reasons. 1) He's a mysterious fellow, and I have a super soft spot for mysterious characters. 2) He's hilarious, and has a spear named "Pointy".

I still liked other male characters, but for the most part Gifford and Malcolm were my standout favourites.

There were, of course, also characters that I hated.

Wow, I've never wanted to punch an elf so badly.

Won't go into details why (spoilers), but if you read the book, you'll know.

Oh, and Nyphron was a bastard too.

Again, won't go into why because of spoilers, but dang. I'm pretty sure that Arion was the only "main character" Fhrey that I didn't want to attack.

They were still well-written characters. I just found that they were good at stoking my frustration.

Okay, so what about plot? How was the book's story?

It was solid. It was, when simplified and boiled down, a quest to slay a mysterious monster. The stakes were high, the tension and pacing were excellent, and the environments were fleshed out and vivid.

This book is also THE ONLY BOOK, TO THIS DAY, THAT I HAVE EVER CRIED IN.

This one, however, - THIS ONE - had me actually crying. Tears actually fell.

That's pretty much why I really loved this book. I've never had a book make me cry before, so this one holds a special place in my heart for how it emotionally effected me.


This book gets an upgrade from its predecessor, with a full 5/5 stars from me. Any book that can make me cry deserves full marks.

Obviously, I recommend this book as a sequel. You have to read book one first, but this is a fulfilling, well-written, well-paced book. It sets up for an excellent series, introduces whole new aspects to a world that I already thought I knew through the other series in Elan, built up fascinating cultures, and created something that feels, as I said in my previous review, unique among other fantasies.

Anyway, thanks for reading this review. If you liked it, check out some of my other posts in the archive on the right, post a comment, or like and share wherever you found this blog. It helps out a lot.

Thanks again for reading, have a great day, and I'll talk to you later.
Posted by Nicole Kapteyn at 15:25