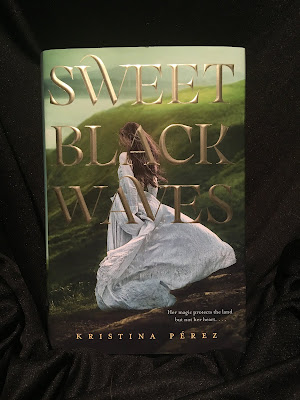 Well, well, well. What do we have here?

A book review, that's what!

I thought I should get more posts out, so I figured I might as well do a quick review of a book I read earlier this year.

As in, this summer.

(What? Me reviewing a new release instead of a book that's several years old? What is this sorcery?)

Let's get the technogobbledegook out of the way first.


Here's the description from the front flap:

Two proud kingdoms stand on opposite shores, with only a bloody history between them.

As best friend and lady-in-waiting to the princess, Branwen is guided by two principles: devotion to her homeland and hatred for the raiders who killed her parents. When she unknowingly saves the life of her enemy, he awakens her ancient healing magic and opens her heart. Branwen begins to dream of peace, but the princess she serves is not so easily convinced. Fighting for what's right, even as her powers grow beyond her own control, will set Branwen against her closest confidant and the man she's come to love.

Inspired by the star-crossed tale of Tristan and Iseult, this is the story of the legend's true heroine: Branwen. Sweet Black Waves is the first book of a lush fantasy trilogy about warring countries, family secrets, and forbidden romances.

Sweet Black Waves is 419 pages in hardcover, and is Kristina Perez's debut novel. It was published by Imprint in 2018, which is a part of Macmillan Publishing Group.

I got this book through the Spearcraft book subscription box. I say this, because this is a book that I wouldn't have gotten otherwise, as it is not carried in Canadian bookstores. It is on the Chapters website, but not on shelves (according to their order page). At least, as far as I've seen. Maybe there's a stray copy floating about in Ontario or Quebec. Maybe in Nunavut.

With that in mind, fellow Canadians, if you manage to get your hands on a copy of Sweet Black Waves, I would recommend it.

But I'm getting ahead of myself. Let's get to some of my thoughts.

As someone who wasn't familiar with the story of Tristan and Iseult, I really didn't know what to expect with this book, since it's a retelling. It led to a lot of things that are very evident in the original story becoming quite the plot twists for me, so I was actually glad to go in essentially blind.

That being said, let's talk about the story here.

As context, I usually don't read books that focus on romance. I don't mind romance in books, but I've often found romantic subplots (particularly in YA books) to be distracting from the plot rather than an enhancement for the story. I prefer it to be a background element.

As you can imagine, this kind of thing immediately makes me skeptical of any kind of YA book that talks about romance as a leading plot.

Even though it was a book that focused on romance, when it actually came to the leading conflict, the romance faded back into being a flavour of the story, not the main focus. The characters could actually prioritize the important parts of the scenes, which I really appreciated. When Branwen had to focus on a task before her, or was confronted with an issue that needed her attention, she wasn't constantly thinking about her love interest.

It was a definite step up from some other YA I've read, where it felt like characters would NEVER STOP THINKING ABOUT THEIR LOVE INTEREST DURING TIMES THAT REQUIRED THEIR ACTUAL FOCUS.

On the topic of romance....

I'm a sucker for a really charming and caring love interest, and that is something that this book definitely delivered on.

Let me put it this way:

I don't like it when a male love interest is a guy who is always charming every girl he sees, sleeping around, being dishonest, and playing every girl me meets aside from 'that one super-special sweet little main character'. I really don't go for that. I find I can't trust a character who isn't loyal to their love, no matter how much they claim otherwise. It's a rare occurrence for me to like a flirt.

What I do go for is a male lead who finds one girl that he loves, and is charming toward her. Where he romances the character that he has fallen for rather than skirt-chasing every girl who blinks at him.

Tantris is that second kind of male lead.

He is charming to everyone he meets, but not the way he is charming toward Branwen. He acts as a friend to everyone, he wants to be a friend to everyone, but with Branwen he always acts differently. You can tell that it's more than friendship, and it really makes for a lot of sweet and touching moments between them. It leads to a character that you never doubt will be loyal to the lead, and will never do anything to hurt her. When he tells her that he would cross oceans for her and will devote himself to her, you believe it.

It was the same for Branwen's character toward him. Even though she had other men pursuing her through the story, and even though she had a lot of internal conflict about Tantris at first because he is from an enemy country, you know for a fact that she would never betray him.

As someone who finds loyalty and honesty incredibly attractive and important, it was definitely a relationship I could get behind.

On those two characters themselves, both were also just plainly likeable. Even when they made mistakes, I found myself rooting for them.

...then there's the princess. Essy.

...my word, did I end up hating this little twit.

I can't say why. I can't. Because spoilers.

She is one of my most hated characters. I related to and liked her at first, but by the end of the book...

..I've never wanted to see a character thrown into a pit of lepers more in my life. But I guess I'll have to wait for the sequel for that.

The plot of this book is very simple: Branwen, the cousin and best friend of the princess, saves a man from drowning after his ship was attacked by pirates. It turns out this man is from the kingdom that has been at war with her home for years. She fixes him up an hides him from her countrymen as he heals from his wounds, their love blossoms, and a whole lot of political intrigue and shenanigans ensue. I don't want to say much more, because I find the book is better to go into blind.

Overall, it was well paced, and had good focus. The only thing I wish it had would be some areas that were from a different POV, as the entire book is from Branwen's perspective, and some input from a different character or two could have really fleshed out some of the plot points.

Considering that this was a debut novel, the way it was all tied together was pretty solid.

The writing was also an area that I felt had a bit of a 'first book' feel to it, but it also felt like it was getting into its stride by the end of the book, which makes me expect the sequel to have stronger prose. It wasn't writing that felt bad or anything, it was still pretty decent, but it's definitely one that I look forward to seeing evolve as Kristina's writing becomes more experienced.

I'd give this book a solid 4/5 stars, for really managing to impress me.

This was a good read. I really enjoyed it. The ending wrecked me for a solid day after I finished, and I need book two. I don't care that I'll need to order it. I need it, and I really looking forward to seeing where this story goes.

So, if you're into a book with some sweet star-crossed romance, some unexpected turns, and with some strong potential to turn into a really interesting trilogy, give it a go.

However, if romance really isn't your thing whatsoever, probably give it a pass. It's a romance at its heart, regardless of how well it's all put together.

Anyway, that's all I've got for this review. If you enjoyed this post feel free to leave a comment or give it a share, it helps a lot. If have any recommendations for things to review in the future, let me know in the comments down below or wherever you found this post.

Have an awesome day, and I'll see you next time.
Posted by Nicole Kapteyn at 12:09