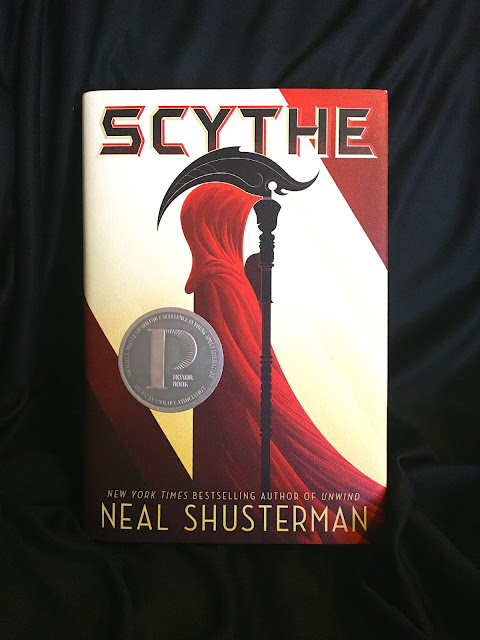 Let me tell you about it, because darn it people need to know.

Alright, so I was really excited to read Scythe because I had only heard good things about it. It seems quite well loved in the YA community (on BookTube, at least, since that's where I hear about these things. I don't know about elsewhere, but on Goodreads it has a nice fat rating as well), and, to be honest, the concept was REALLY intriguing.

So I actually had expectations this time when I went into it.

Were my expectations met?

Before getting into the review portion of the review, let me tell you a bit of the more technical gobbledegook.


Here is the description from the cover:

A world with no hunger.

Humanity has conquered all those things, and has even conquered death. Now scythes are the only ones who can end life - and they are commanded to do so, in order to keep the size of the population under control.

Citra and Rowan are chosen to apprentice to a scythe - a role that neither wants. These teens must master the "art" of taking life, knowing that the consequence of failure could mean losing their own.


Scythe is the first book in the Arc of a Scythe series, and received the Michael L. Printz Honor for excellence in Young Adult literature in 2017.

This book is 435 pages long in hardcover format, and was published by Simon & Schuster in 2016.

ON TO THE REVIEW


As a precursor, let me put things this way:

I'm currently only getting YA books out of the library. I know that YA is fairly hit or miss for me, and with how expensive books are (especially with Canada's current economy...), I don't want to have a whole bunch of books that I find mediocre or worse hanging out on my shelves and draining my bank account.

After reading Scythe, I went out and bought book two and I ordered the hardcover edition of Scythe so that I can have a matching hardcover set of this series.

That's how much I loved it.

So first off, I want to address the elephant of the book:

How violent is this?

Very. And yet, not very.

It's a book about people who are being trained to essentially be Grim Reapers. What else would you expect?

This isn't a spoiler, but essentially the world it takes place in is Post-Mortalist, so if somebody dies they are brought to a revival centre and brought back to life. The only ways that somebody permanently dies is if they are 'Gleaned' (killed by a Scythe), or if they die in a fire, because you can't revive a body if there is no body to revive.

However, the way that death is handled in this book is very mature. There is little to no gore, in spite of the amounts of corpses being piled up. There are a few scenes that are more visceral than others, but it's nothing too bad.

Basically, if you're a bit squeamish about violence, I don't think you need to worry about it. Many deaths are extremely chilling, but beyond that they're nothing graphic.

Honestly, if you're fine with something like The Hunger Games, you'll probably be fine with this. Hunger Games is likely more violent just based on how the violence is treated by the series itself.

On the subject of how this book handles death, I found it was done very well. There are philosophical questions introduced and left unanswered, only lightly speculated on, which I really appreciated. I've read books before that tried to go all philosophical on concepts that they introduce, and it gets old REALLY fast. This book, while introducing the questions to the readers, allows the story to still take the forefront and act as the way we see the questions explored through character development.

In fact, this book is really character driven. The action that is there is excellent, but it's not a book with a breakneck pace. It's a book that lets the characters and the way they develop drive the story.

ON THE SUBJECT OF CHARACTERS, CAN WE TALK ABOUT THESE CHARACTERS?

Let's talk about our leads: Citra and Rowan.

Badasses. The both of them.

Confession: I wasn't really keen on reading Citra at first. I was expecting her to become really whiny and useless as a character. I expected her to be an 'empowerment' message rather than a character, since that's what I've seen and felt about some female leads in the past, particularly if they are in a similar situation as Citra. I expected her to have severe self-confidence issues. Constantly griping about not being good enough. Always being timid and squeamish about everything that she had to do.

I couldn't be more wrong.

Citra was a character who went so far past being 'the girl one'. She was competitive. Sassy. Stubborn. She didn't want to be a Scythe, but darn it she was competing against someone now and she sure as heck wasn't about to lose.

Yeah, she's a girl who doesn't do anything in half measures. The idea of losing is abhorrent to her. She was driven to succeed, clever, and developed into a really wonderful character to read about. (Super excited to read about her in the second book, as well.)

What about our other lead? Rowan?

I WANT TO GO INTO SPOILERS SO BAD ABOUT THIS CHARACTER BUT I CAAAAAAAN'T!

Watching this character evolve was incredible. He went from apathetic yet compassionate to all-out badass. He's shrewd, snarky, and somehow he was also frequently adorable. He has every excuse to become something he's not, and yet he stands against it, though you still see the effects of it upon his character.

He was so incredible to read.

Again, I would detail more, but I CAN'T WITHOUT DROPPING ALL THE SPOILERS.

Every Scythe you meet in this book is distinct in everything they do. They all wear different coloured robes, glean with a different technique and attitude, and act in their own way, making them so much more than just the background characters that they easily could have become.

There's also the matter of the romance in this book.

IT ISN'T THE FOREFRONT OF THE STORY! YAY!

There is chemistry that is slowly built between Rowan and Citra throughout the story, and it does effect them and their choices, but it isn't an aspect that is really focused on. It feels like a subplot, because it is a subplot.

As I said earlier, this book really is about the development of these two characters throughout their training. It isn't plot driven so much as it is character driven. I really can't stress that enough.

On the topic of training...

This book takes place over the course of a year, and considering that they are spending every waking moment doing something that revolves around their Scythe training, it really does make sense just how skilled they become, even though they still have much to learn by the end. Both of them are also shown to be very intelligent teens before they become apprenticed, so their learning development does make sense.

I'm sorry if this review sounds a bit incoherent. I can't talk much about the character development or plot without giving away a lot of really cool points in the book, and I really don't want to give any spoilers for this.

On that note, do not read the description of book two. I did before reading Scythe, and there are some spoilers in the description. It didn't ruin the read for me (obviously), but I feel like the ending of the book might have had a bit more impact for me if I had no idea what would happen next.

Do I recommend this?

Obviously, yes. If you want something driven by really cool character development, interesting psychology, and really neat futuristic concepts, then please read this.

Anyway, those are my thoughts on Scythe. I'll probably post a more analytical spoiler review as well, since this is a book I really just want to talk about. It was so cool.

Hope you enjoyed the review, if you did leave a comment and give it a share. Helps a lot!

Thanks for reading, and I'll talk to you again soon!
Posted by Nicole Kapteyn at 18:33