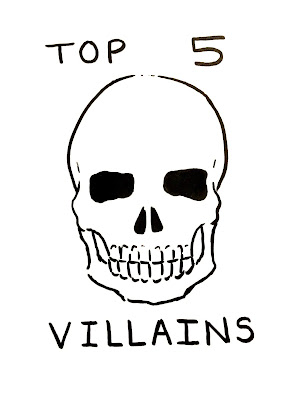 Welcome to another Top 5 Wednesday.

Welcome to the topic I had been VERY MUCH HOPING FOR in this month's Top 5 Lists.

If you've been reading my blog for awhile, you might have seen that last year I did an entire villain-themed month for October. (Links will be at the bottom of this post)

By the way, if you would like to see my previous Top Five Wednesday, check it out right here, and you can check out the Goodreads Group for Top 5 Wednesday right here.

Anyway, I love villains, so this was a particularly interesting list to narrow down. Since I want to keep my Top Fives to books only, the main top five list will only be book villains. However, I will have a few honourable mentions from other mediums at the end of the post.

Also, these aren't really in a particular order, these just happen to be my favourites, but I can't really put them one over the other. I love them all for different reasons.

' "There's never really a good opportunity for us to have a civilized conversation. I'm seizing the chance for a chat." He gestured at the building around us. "Sans demolition, if you think you can refrain." '

Let's start with a villain who has some class, shall we?

Possessed by an extremely powerful fallen angel for the past several hundred years...

Well, then. That kind of puts a damper on things, doesn't it?

Yeah, I really like Nicodemus. He is the consummate villain of class. He often avoids conflict, instead trying to handle things with words instead of violence. When he does get violent, though...scary. Very scary.

He's also confident enough to constantly wear a noose around his neck as a tie.

Yup. That kind of guy. Every time he appears on the page, he has such a wonderful magnetism to his character, and enough charisma to always hold my attention.

' "Human beings are predatory by nature," he began. "That nature may have been bleached out of us by the sanitizing force of civilization, but it can never been taken from us completely. Embrace it...Suckle at its transformative breast. You may think gleaning is an acquired taste, but it's not. The thrill of the hunt and the joy of the kill simmers in all of us. Bring it to the surface and then you'll be the kind of scythe the world needs." '

Ah, Goddard. The most over-dramatic and charismatic character on this list.

He honestly drips arrogance and waxes poetic at EVERY OPPORTUNITY.

Don't get me wrong - some part of me loves the character. He is so over the top and sinister and self-righteous that I can't help but watch every time he walks onto the page.

He's also unsettling enough that, every time he walks onto the page, I cringe a little bit inside, but I can't look away. It's like finding a big spider in my room. I don't want to look, but if I look away I might miss them doing something terrible.

' "I dwell in darkness, and darkness is where I belong." '


I actually haven't read Outlander yet (which is why I chose a quote from the show), so maybe this is cheating, but I had to include him.

Part of it is because my first blog on villains last year was actually focused on why he's a good villain, because he nails a lot of qualities that I think villains should have. (Link will be at the bottom of the blog!)

The other part is because I know that the show did a very good job of portraying him, and I know that if I were to read the books he would still be on this list.

NEVER BEFORE has a villain managed to make me cringe and want to just squirm away every time they make an appearance. Even just looking up quotes for him for this post made me cringe all over again. Part of it is because of Tobias Menzies, the actor portraying him (He did an AMAZING job of it), but another part of it is that he. Is. So. CREEPY.

NOBODY SHOULD EVER BE THAT OBSESSIVE OVER ANOTHER PERSON, THANK YOU VERY MUCH! AAAAAAAH!

' "All right," Straff said, setting down his fork. "Let's be honest, boy. I'm this close to simply having you killed." '

- The Well of Ascension (Mistborn #2) by Brandon Sanderson

(Side note here: this quote took so long for me to decide on. He has so many interesting quotes and amazing villainous back and forth with the heroes, but most of his quotes make no sense without context or contain spoilers. Just saying.)

This is a villain that everyone seems to forget in the Mistborn trilogy, and I don't know why. Nobody talks about this guy. Nobody seems to even remember that this guy was a villain.

Let me put it this way: the character of Straff Venture is like Brandon Sanderson asked himself what the worst qualities he could put into a character were, and he put them all into a single man.

He disgusts me. He literally disgusts me. I hated this character. Part of me loved him for how evil he was, but the rest of me was just disgusted by him every time he walked onto the page. It was similar to the feeling that I have whenever I see Black Jack Randall. Just...eeeeeeeeeeeeugh.

However, the upside is that it makes his comeuppance so satisfying in the end.

' "I cannot and will not force you to take up this burden - as always, this is the only freedom I can give. But I ask that you look to the greater good. I ask that you remember that all that is done will be undone. And I ask that you never forget that these sins will be mine to bear, not yours." '

- An Echo of Things to Come (Licanius #2) by James Islington


Since I primarily read adult Epic Fantasy, it would be wrong of me to not bring up a really 'big bad enigmatic all-powerful string-puller' type of villain. The mysterious entity that is in control of the darkness. The evil that is seeping its fangs into the world.

There were so many to pick from, but I wanted to shine a bit of light on the one in a newer trilogy, which is Licanius.

Why are there two names, you may wonder?

I put two names because you can never be sure exactly who he/it is. Heck, I have my full suspicions on this character, but I don't want to be spoilery and, since the series isn't done yet...

I don't want to make assumptions before I know what's going on.

This character/entity is among the most conniving entities I have ever read. The things that he does to get people to do his bidding without question, the deceptions he weaves, the way he manipulates events into his favour. He's a character that is able to push people in exactly the right way to move them the way he wants them to, and the more I learn about the things he has done, the more interested I become. He's not a villain I would normally pick, but I think he's worth a mention.

Besides, I honestly have no idea what his plan is, since book three isn't out yet, but so far I'm intrigued.

Truthfully, this is a bit of an unconventional pick, but I'm running with it. This series is getting traction, needs more love, and if you want to find out more about this villainous entity and the things he pulls, go check the series out. It's well worth it.

Of course, I had to have honourable mentions here: One for Film, one for Television, and one for Video Games. They're not officially part of the list, but since these are also stories I love I want to bring some attention to them as well. So, here we go:

I could have chosen someone more iconic for this, but I wanted to think outside the box for this honourable mention.

Maybe this is cheating, since Rurouni Kenshin started as a manga, then was adapted into both an anime and live action trilogy. (AMAZING series, by the way. Particularly the manga and live actions. As far as live action adaptations of fiction go, this one is among the best I have ever seen.)

Here's the thing: when I heard that Shishio was going to be done in the live action movies, I didn't know how they would do him in a threatening way. To be honest, he has a...kind of weird and goofy design, even as anime villains go.

They made him perfectly villainous, and it definitely makes him a villain to remember.

I could have picked any villain from Gotham for this, really, but I just needed to choose their "proto-Joker", Jerome.

I know they can't call Jerome the Joker due to legal and copyright issues, but I still consider Jerome my favourite Joker.

I know, I know, unpopular opinion. How dare I not find Heath Ledger the best.

I don't care. I love Jerome's character, and I love how he is written and portrayed. Cameron Monaghan just has a wonderful stage presence, and I find him mesmerizing to watch in this role. I've never been so entertained and yet so terrified by a villain all at once.

Yeah, I've recently been revisiting Final Fantasy VII, so of course it's at the front of my mind.

I love Sephiroth and Ardyn. Both have a wonderful magnetism to them, and I have fun every time they walk onto screen. However, the only one of these three to give me the legitimate creeps was Hojo. I mean...just...eeeeeeugh…

All you have to do is look up a picture of him, and you kind of get the idea of what kind of character he is.

Evil scientist. That's all I feel needs to be said about him. Evil Scientists have always creeped me out more than any other villain, and he was an exceptionally creepy one.

And let's face it. LITERALLY EVERYTHING IN FINAL FANTASY VII IS HOJO'S FAULT.

That concludes my pics for my Top 5 Villains! Do you agree with my picks? Who are some of your favourite villains? Let me know in the comments down below or on whatever platform you found me on, I'd love to hear your thoughts!

Also, if you like what you read, feel free to give it a share. Helps a bunch!

Thanks so much for reading, and I'll see you next time!


Links to my previous posts on villains:

The Relationships Between Heroes and Villains

Thirteen Types of Villains You Will Find in the Wild

The Defeat Your Villain Deserves
Posted by Nicole Kapteyn at 16:32